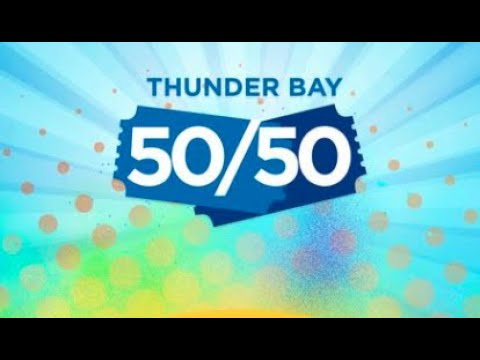 Thunder Bay – June’s Thunder Bay 50/50 was certainly a regional draw! Each of the four prizes was won by ticket holders from regional communities in Northwestern Ontario – including all three Early Birds, and the Grand Prize which was won this morning by Dryden’s Vic Zajarny.

“We’ve seen support for the Thunder Bay 50/50 from across Ontario,” said Glenn Craig, President & CEO of the Thunder Bay Regional Health Sciences Foundation, “Of course a huge percentage of that support comes from Northwestern Ontario, and we’re grateful that people recognize that our Hospital is regional.

Every month Glenn Craig has the pleasure of calling the Grand Prize winner and letting them know they’ve won the Thunder Bay 50/50 jackpot. This month’s call, however, did not go to plan. Vic Zajarny was a difficult man to get a hold of, and it soon became apparent why. “I’m at work, in a mine three quarters of a mile underground.” said Vic, when he called Glenn back after finally contacting him via text, “Cell phones don’t work down here. Luckily we have Internet so I was able to see your text, otherwise I wouldn’t have known!”

The news shocked Vic, who has a personal reason for supporting the draw.

“About 10 years ago my wife was flown to Thunder Bay’s ICU. I have only good things to say about your Hospital. You’re top notch.” Vic said, “You saved my wife’s life, and I will always be grateful for that.”

Vic has been a supporter of the Thunder Bay 50/50 for months, and says he will continue to support into the future.

“I just like to buy tickets to support a good cause. I didn’t expect to win. Not in a million years!”

Vic says he’ll use his jackpot to pay off some debts, then save the rest for retirement.

The raffle continues with a new Grand Prize draw on the last Friday of every month. The July draw is now open, with some exciting changes! There is a new limited-time $75 price point, and three $2,154 Early Birds to be won throughout July.

Tickets are available online only at thunderbay5050.ca:

Questions about the draw can be sent to info@thunderbay5050.ca. Ticket purchasers must be present in Ontario to purchase. Lottery licence RAF1199631.