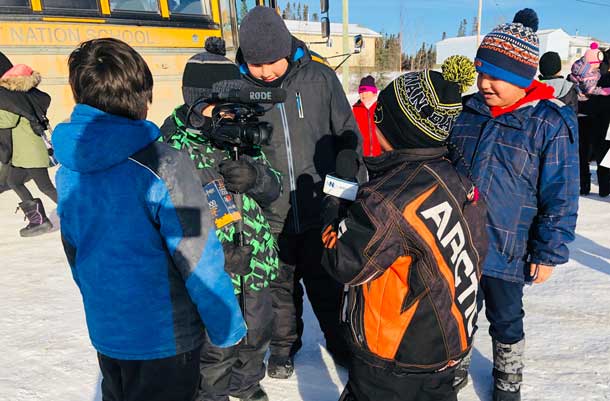 THUNDER BAY – This December, the RCMP, Gardewine Group – Transportation and Logistics and North Star Air will once again deliver toys and more to remote First Nations communities in time for Christmas! Thousands of pounds of donated new toys, basic needs items, winter wear and more will be arriving in Thunder Bay via CAF military aircraft C-130 Hercules this Friday December 2nd at 11:30 am ET.

“The Toys Campaign has grown in the last few years, despite the pandemic.” says Karen Matson, Marketing & Community Relations at North Star Air, “The generosity of so many organizations who wish to donate is remarkable, both locally and from afar!”

North Star Air’s team has been working with the “O” Division Royal Canadian Mounted Police (RCMP), participating in the ‘Toys for the North’ charitable drive. The initiative has evolved over the years to include a national network of RCMP, law enforcement, corporate and external partners who collectively contribute to the success of delivering new toys to children in remote Northern communities. North Star Air has been a partner of the Toys for the North campaign for the last 8 years.

The arrival of the Hercules in Thunder Bay this week doesn’t mean the journey to the North is over. The toys, along with other donated goods will be air delivered in the coming weeks to remote northern Ontario First Nations communities via North Star Air’s flight network. “We’ve targeted three communities to visit this Christmas: Poplar Hill First Nation, Sachigo Lake First Nation and Webequie First Nation. They have a school pageant planned with the youth in Sachigo Lake on December 15th. We’ll be bringing two special guests on this trip!” continues Matson.

Once the cargo is off-loaded from the Hercules in Thunder Bay on Friday, Gardewine Group – Transportation and Logistics will then move the cargo to their local warehouse where the toys will be sorted by age and gender per community next week. “Our team of volunteers will help with the sorting as we will be receiving thousands of toys, close to double from last year!” says Cpl. Darryl Waruk of the RCMP Thunder Bay Detachment. “We are happy to be a part of this generous campaign that brings joy to children in remote areas of Canada.”

The goods will then be transported by Gardewine Group – Transportation and Logistics to the North Star Air hangars in Pickle Lake and Red Lake where they will be loaded onto aircraft for their remote First Nation destinations.

Representatives from North Star Air, the media and our very special guest Santa Claus will bring joy to so many young people of the North thanks to the efforts of the RCMP and the network of donators.

Travel to the North is planned for the week of December 12 to 16. You can follow our journey north with RCMP Toys for the North and Santa on our North Star Air Facebook page.