THUNDER BAY – DAY-Starter – Good Morning Northwestern Ontario. There is an old saying, “Red Sky in morning, sailor take warning, Red Sky at night, sailor delight”. This morning looking out over Lake Superior, there is a beautiful red sky. Currently, in the city, it is -7c under cloudy skies. Environment Canada is calling for a 30 percent chance of flurries today. Winds will become east 20 km/h this afternoon. Today’s high will be zero. Hard to tell how much warning any sailor might take from that forecast. 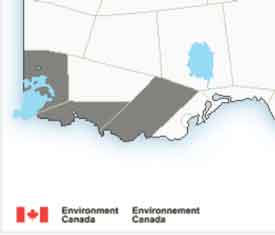 However, just to the west of the city, there are Special Weather Statements in effect.

“A more significant system, a Colorado Low, will approach South Dakota Monday morning and then track eastwards. Snow associated with this system will begin Sunday night or early Monday morning. Current indications are that the heaviest snow will fall over Minnesota and that Northwestern Ontario will be brushed with only 2 to 5 cm of snow. However, if the low tracks further north, higher snow amounts would be possible. The track of the low will become more certain as the system approaches.”

If you are headed west this weekend, keep in mind road conditions are likely to be less than ideal. For those who are history buffs, March 4, 1966 is a date when a major blizzard hit southern Manitoba and basically shut down the city.

TORONTO – FOOD RECALL – Loblaw Companies Limited is recalling certain pre-packaged Cooked Shrimp (56/65 Shrimp per lb.) from the marketplace due to the potential presence of raw shrimp, which may contain harmful bacteria. Get all the details.

THUNDER BAY – ART – Kevin Palmer’s photo of a miner at the Musselwhite Mine is featured on the cover of this month’s Canadian Mining Journal. The photo taken a half mile underground is part of a series celebrating Goldcorp’s Gender and Cultural Diversity and features Musselwhite’s Underground Mechanical Specialist Lorraine Gesic.

On this day, the Ottawa Senators beat the Montreal Wanderers, 8-3 to win the Stanley Cup in 1909.

In Toronto, on this day, Dr. Banting and. Dr Best announced the discovery of insulin in 1921. Their discovery has saved countless people from diabetes.

The lowest prices for a litre of gasoline continues to be in Dryden. Fuel prices across the region range from $1.1139 in Dryden, $1.184 at the Husky on Chipman Street in Kenora,  In Thunder Bay, the lowest price in the city is $1.219 at the Safeway on Arthur St W. Out on the Fort William First Nation, gas prices range from $1.037 at K & A to $1.139 at First Class Gas. You can get the latest gas prices, including Grand Marias MN at GasPrices on NetNewsLedger.