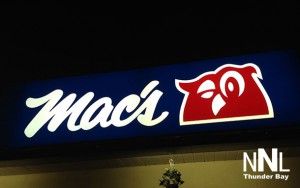 THUNDER BAY – CRIME – The Thunder Bay Police are releasing three videos of robberies that occurred during the last week of December at various Mac’s Convenience Stores in the city.

Patrol officers were dispatched to the Mac’s Convenience Store located on Oliver Road at approximately 11:30 p.m. on December 28, 2017 in response to t a robbery that had just occurred.

A male entered the store with his face covered in a ski mask and proceed to go behind the counter and demanded money and cigarettes. The suspect left the store after acquiring both items. The 27-year-old male employee was not injured.

The suspect is described as a 6’0″ male with a heavy build. He was wearing a grey or green hoodie and black athletic pants with a double strip down the leg.

On December 30th, officers attended the Mac’s Convenience Store located on Cumberland Street just before 2:00 a.m. on a report of a robbery that had just occurred.

The 24-year-old male cashier was approached by a male carrying a knife and with his face covered. The male demanded money and left with some cash. The victim was not injured.

The suspect is described as a fair skin male who is approximately 5’5″ tall and 180 lbs. He was wearing a black hoodie with three 1′ white stripes on the left sleeve and a black baseball cap.

Police were called to the Mac’s Convenience Store located on Cumberland Street just before 10:30 p.m. on December 31, 2017.

A male entered the store with a knife and demanded money from the 24 year old male employee. The suspect left with a small amount of cash. The employee was not injured.

The suspect is a Caucasian male who is 5’10” tall with a medium build. He has a thin face with a brown facial hair. He was wearing a black jacket with a dark blue or grey hoodie underneath it, grey joggers with writing on the left leg, black shoes with white rubber soles and black gloves.

Anyone who has information about any of these incidents or can identify the males in these videos is asked to contact the police at 684-1200 or Crime Stoppers at 1-800-222-8477 orwww.tipsubmit.com. Please make sure to reference the incident number of the video.