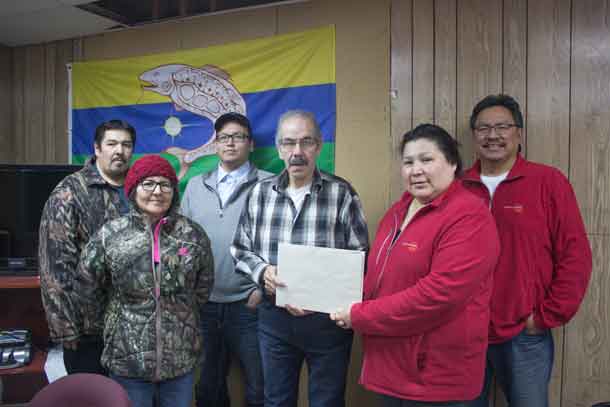 Kitchenuhmayoosib Inninuwug – BUSINESS – Building and encouraging a local economy is well underway in Kitchenuhmaykoosib Inninuwug. There are a growing number of locally owned businesses open, or expanding in this Northern Ontario community of 1200 people located on Big Trout Lake.

The community has several stores offering groceries, fuel and hardware, a rapidly expanding bed and breakfast with a small store with soft-serve ice cream and iced cappuccinos that will be open at the end of the month.

The goal is a simple one, building the local economy, creating jobs and making the community a better place to live.

That is not to suggest that there are not real challenges. But KI is stepping up to meet those challenges, and a lot of the credit must go to community members who are supporting and encouraging entrepreneurship.

Sam’s Store in KI is a large operation offering groceries, hardware, fuel and many of the needed items that people in the community need to purchase.

The Sunset Lodge a beautiful bed and breakfast which has had guests from all over the world including the Countess of Wessex, Ontario Premier Kathleen Wynne and Toronto Mayor John Tory offers comfort and convenience.

Owner Stan Bluecoat is expanding his operation having invested in brand new equipment to open a store to go along with the bed and breakfast. The new store is geared to open in a few weeks and will offer a variety of take-out meals, soft-serve ice cream.

One of the challenges facing KI is the increasingly unreliable winter road network. Right now, after the January thaw of recent weeks, the roads have been closed. That places an increased reliance on air transportation and especially on air cargo for needed supplies. One of the key needs of KI is gasoline and diesel fuel.

While there is a wind turbine in KI, the community relies on diesel powered generators to keep the electricity flowing.

North Star Air with its fleet of Basler BT-67 aircraft have been pushed into almost twenty-four hour a day operations in recent weeks getting fuel into communities across the North.

The Basler BT-67 aircraft is a game changer for servicing the northern community’s air freight needs. The aircraft has the capability of flying and landing in extreme conditions and is uniquely fitted for ice, snow and land. Another key competitive advantage is the BT-67 proven reliability, safety and operational costs efficiencies. This is a plane designed for harsh northern conditions.

The BT-67 can bring in up to 6800 litres of vital diesel fuel per load. That fuel keeps the thirsty generators running across a number of communities. North Star Air has even had to step in and assist one of their competitors in the delivery of 1.1 million litres of diesel fuel in December and continued into January.

Getting food into the community, is another area where air cargo offers a real benefit. In KI there are fresh fruits and vegetables are for by Northern standards are very reasonable.

There is also across the community’s stores fresh meat, everything from pork chops to chicken to steak and hamburger. And despite what you might think, the prices are quite reasonable too. A package of four chicken thighs ran at $8.75 for the package in one of the stores.

North Star Air ships in a lot of the groceries and fuel into KI and has formed business agreements with the community stores and with the PDC, the KI Economic Development Corporation.

On January 27th, North Star Air was in KI presenting rebate payments to the Tasona Store and to the KIED Gas.

In addition, the company is now one of the proud sponsors of the KI PDC/North Star Air Atom hockey team for the Little Bands Northern Hockey tournament.

Young players in the community on Friday were also holding a fundraiser selling Indian Tacos to help raise funds to pay their own way to the tournament which will be held in Sioux Lookout.

The goal in KI of a growing number of people is to help foster community pride, and to create a community with increasingly self-reliant people.

MaryEllen Thomas of North Star Air says, “Business collaborations with North Star Air will provide better value for customers and communities through solutions. We offer better cost efficiencies, improvements with on-time delivery, security of supply to ensure steady supply of goods and services. Getting vital supplies into communities on time is key. Working together and building relationships that are intended for the whole community to benefit, and achieving successful results is a major goal of North Star Air.”