WINNIPEG – As the search for Kam McLeod and Bryer Schmeglsky continues, we are able to provide the following update.

Last night, at approximately 5:00 pm, the RCMP received a tip that two males matching the description of the wanted suspects were seen in York Landing, Manitoba. Reportedly Winnipeg Bear Clan Patrol members spotted the two foraging at the garbage dump.

Officers searched the York Landing area throughout the night and continue their efforts today. The Royal Canadian Air Force is also assisting today with the search.

Officers on the ground have not made contact with the individuals, as such, the RCMP is not yet in a position to confirm that these are the wanted suspects.

The goal today remains to safely locate and apprehend the individuals and confirm their identities.

There is a heavy police presence in the area of York Landing and the RCMP’s priority is community safety.

It is critical that residents of York Landing remain vigilant and stay indoors as much as possible with their doors locked, and to report anything suspicious by calling their local police immediately. 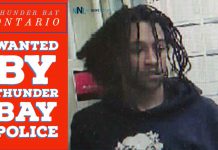