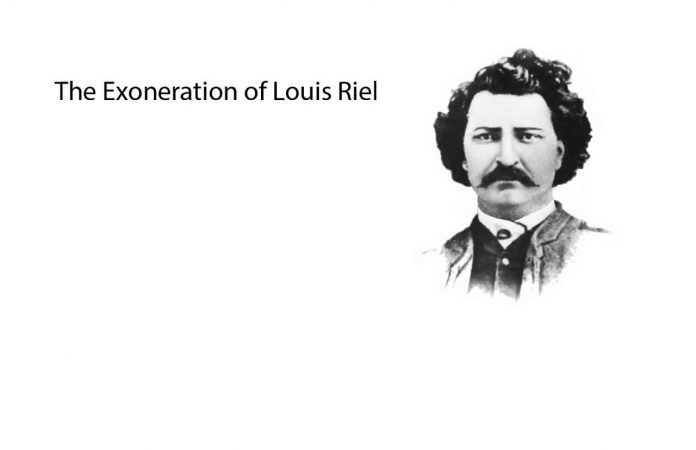 Recent media reports have indicated a resurgent interest among Metis leaders in insisting the Canadian government right a long-standing wrong. The president of the BC Metis Federation and the Manitoba-based Union Nationale des Metisse along with a prominent Montreal city councillor held a media conference demanding that Louis Riel be exonerated. The media conference was most timely. It was 135 years ago this week when Riel was killed by a Dominion government hell-bent on removing this major irritant to its ill-conceived plans.

Louis Riel is a Metis and Canadian hero. He championed the recognition and protection of the cultural and linguistic [PG1] rights of the peoples who populated the prairies long before the newly formed government of the Dominion of Canada decided, without consultation, to acquire the lands occupied by these original inhabitants. In leading the resistance against MacDonald’s careless unilateralism, Riel was able to negotiate and usher Manitoba into the Canadian Confederation with the rights of the Metis, Indigenous and French-Canadian inhabitants recognized and protected – at least on paper. Many have successfully argued that the fruition of the recognition of those rights for the Metis community is still very much a work-in-progress. Successive national governments have not only ignored them but actively have actively violated those rights for which, arguably, Riel paid the ultimate price – murderously executed by a government bent on settling a score.

Wrongly charged, wrongly convicted and wrongly executed, the aforementioned Metis leaders are calling for a complete exoneration of Louis Riel. But not all Metis leaders are in agreement. Bolstered by the arguments advanced by the Metis lawyer Jean Teillet, the Manitoba Metis Federation (MMF) has been MIA and has consistently opposed this long overdue exoneration.

Their position has been best captured in Teillet’s book, The North-West is Our Mother, where she makes the following claim: “Whether called exoneration or a pardon, such an act is one of extrajudicial clemency. It is a government grant of political expediency. It is never about justice or mercy. Clemency is never a statement of the accused’s innocence and always implies guilt and forgiveness. The government would be exonerating itself, not Riel. That is why the Metis Nation has rejected all calls for a pardon or exoneration. In their opinion it was Canada that committed the crime of hanging Riel. . . . As one of the Metis Nation’s legal scholars, Paul Chartrand, put it, “The hanging of Louis Riel is a stain on the honour of Canada. Let the stain remain.”

Teillet’s arguments are troubling and not simply because they appear to be sanctimonious, self-serving – even petulant. We are all familiar with the greed and racism that drove the Dominion government of the day to execute Riel (“though every dog in Quebec bark in his favour” as MacDonald so ignorantly put it). And, yes, Chartrand is correct in that this will always be a red stain on the honour and history of our country.

So too was the dishonour and shame our federal government brought upon itself for the catastrophic legacy of residential schools, or for the humiliation and forced removal of Japanese Canadians from their homes during the second world war. The governments of our day admitted to those wrongs and apologized for them and began the process of compensation while supporting other initiatives like the Race Relations Foundation and the Reconciliation process.

This is what restorative justice begins to look like in all its human fits and starts – so different from the professed pain of victimhood in which Teillet’s arguments appear to wallow and from which they advocate! That position is a niggardly one and ill-serves the ostensible cause of the Metis Nation.

The following is one definition of exoneration (italics my own) “Exoneration refers to the court taking back a defendant’s criminal conviction, vindicating the defendant with the official absolution of a guilty verdict. Exoneration requires the reversal of a criminal conviction through a display of innocence, a flaw in the original judgement, or other legality.” In short, exoneration is an action undertaken by the wrong-doer not by the person to whom the wrong was inflicted. It is a judicial exercise in righting a wrong and owning it. However, in two brief sentences cited above, Teillet conflates exoneration, pardon and clemency into a common meaning. As a lawyer, she should know better.

A formal apology, an admittance that Riel’s hanging was tantamount to an extra-judicial execution, a complete exoneration coupled with a proposal to make Louis Riel a Father of Confederation would be a far more constructive way forward than the pious, ill-serving position of those individuals and organizations who wish to ensure that the red stain to which they justifiably refer remains a conspicuous crutch that is forever indelible.

Peter Andre Globensky is a former senior policy advisor on Indigenous Affairs in the Office of the Prime Minister and retired as CEO of the Canadian Council of Ministers of the Environment.