THUNDER BAY – All Canadians, regardless of where they live, must have access to safe, reliable transportation options at affordable rates says the Green Party. Too many people living in remote and rural areas have no way to travel outside their communities.

A Green Party government will develop a national transportation strategy with a goal of reaching zero-carbon public ground transportation everywhere in Canada by 2040. Rail will be the hub, with spokes of light rail and electric bus connections. This includes service to rural and remote communities which not only reduces greenhouse gas emissions but also responds to the recommendations of the National Inquiry into Missing and Murdered Indigenous Women and Girls.

“Everyone in Canada should be able to rely on public transportation,” said Green Party Leader Elizabeth May. “I’ve criss-crossed this country using trains and buses and I know first-hand how challenging it can be to travel this way in rural communities. The recent cancellation of Greyhound bus service in western Canada has made a bad situation even worse. We must make sure Canadians have access to affordable transportation no matter where they live”. 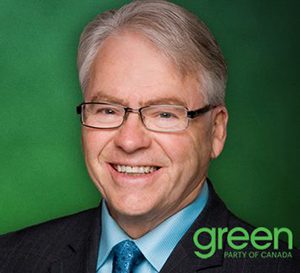 Thunder Bay Superior-North Green Party candidate Bruce Hyer says, “I have been fighting to restore VIA Rail for over a decade, including bringing VIA back through Thunder Bay and the Superior North Shore. Regional and national bus service is also critical. Canada is the only developed country in the world with no transportation strategy, and no integration of air, bus, and rail connections. Unbelievable!

“The investments the Green party will make to infrastructure and transportation will increase accessibility and travel across the country. In 2008 as a former Canadian Forces member VIA Rail provided transportation from one end of Canada to the other, but Thunder Bay was not accessible,” states Amanda Moddejonge, the Green Party of Canada candidate in Thunder Bay-Rainy River. “Thunder Bay has always been where people come together. This is a major part of this cities history, and part of what makes it unique. The green party is focussed on eliminating poverty, and ensuring people can get where they need to go.”

A Green government will enact the Via Rail Act to implement a passenger rail transportation policy, investing $600 million in 2020-21, rising to $720 million by 2023 to develop regional rail networks and strengthen rail connections between regions. Rural bus services have completely disappeared in B.C., Saskatchewan and the Maritimes.

The Green Party says that Canada Post can also play an integral role in providing services to underserved communities in rural and remote areas.

The Green Party states that under their platform it re-imagines how Canada Post’s extensive physical infrastructure can be used to offer a range of services to communities, building self-reliance and also helping to cut greenhouse gas emissions. In diversifying services, as recommended by the Canadian Union of Postal Workers, Canada Post can become more profitable while offering support to rural communities where private sector activities such as banking are being withdrawn.

Ms. May stated that a Green government would start by strengthening Canada Post’s existing mandate, and then branch out.

“We will immediately upgrade the Canada Post fleet to electric vehicles,” said Ms. May. “We will model successful programs like the one in France, where postal carriers can check on people with mobility issues, or who live alone. With the climate emergency exacerbating heat events, storms and wildfires, this kind of service will be invaluable to people living in remote communities.”

A Green government will support Canada Post in establishing banking services. With the rapid withdrawal of commercial banks from remote areas, Canada Post will step in to provide essential banking in these communities. Public high-speed internet access will be provided free of charge in post offices, particularly in under-serviced rural and remote communities without libraries. Where space is available community meetings will be held in post offices. Electric vehicle charging stations will be provided in post office parking lots.