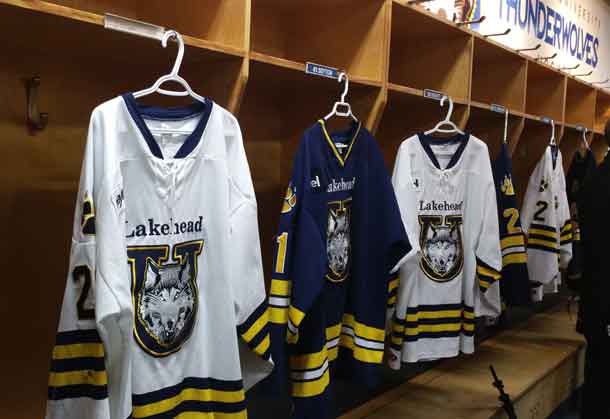 THUNDER  BAY – SPORTS – The Lakehead Thunderwolves will butt heads with the first-place Ryerson Rams this weekend in the Wolves’ last two games before the Christmas exams break, with the opening face-off set for 7:00 p.m. at the Fort William Gardens on both Friday and Saturday nights.

The Thunderwolves collected three points on a three-game road trip last weekend, winning 3-0 at Guelph last Thursday before losing 3-2 in overtime at Laurier and 3-2 in regulation at Waterloo on Friday and Saturday respectively.

Ryerson was dominant in its previous two outings, defeating Western 5-1 and Windsor 10-6 on the Rams’ home ice.

The Thunderwolves hold the advantage in the all-time series versus Ryerson, with a record of 13-7 over the Rams.

Lakehead played at Ryerson on two separate road trips last season and lost both times, falling 5-2 in November before being edged 5-4 by the Rams last February.

With 69 goals for in only 12 conference games, the Ryerson offence is by far the most potent in the OUA.

Ryerson has the top two scorers in the league with Matt Mistele and Matthew Santos.  Combined with forwards Steven Harland and Hayden McCool, as well as defenceman Ryan Basso, The Rams boast five of the top nine point-getters in the OUA West.

Netminder Taylor Dupuis is a mainstay in the Ryerson goal, but freshman Garrett Forrest has seen playing time as well.

Saturday night is the annual teddy bear toss game, where fans can toss a new plush toy on the ice when the Thunderwolves score their first goal.  All teddy bears collected will be donated to several local children’s charities.