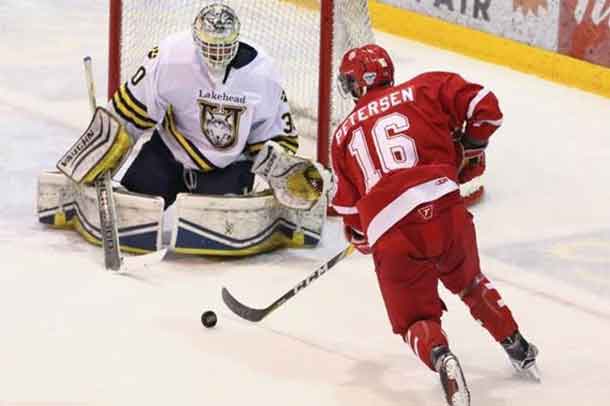 THUNDER BAY – SPORTS – The York Lions scored three unanswered goals in the third period to defeat the Lakehead Thunderwolves 4-2 before a crowd of 2,203 at the Fort William Gardens on Saturday night, giving the Lions a weekend sweep over the Wolves.

Just like the night before, the first period was scoreless, but York’s Justin Maiolino broke the deadlock 44 seconds into the second when he fired an absolute rocket past Wolves’ goalie Nic Renyard.

Lakehead tied the game midway through the period when Scott Gall finished off an odd-man rush by beating Lions’ netminder Mack Shields from close range, with the assists going to Daniel Del Paggio and Jordan Larson.

Lakehead went ahead at later in the period when Shields was caught out of position and Josh Laframboise fed Austin McDonald in the slot, who fired the puck into the open cage to give the Wolves a 2-1 lead heading into the third.

Things unravelled for the Wolves in the final frame, beginning with Daniel Nikandrov’s shot from the hash marks that sailed past Renyard’s glove at 5:27.

Scott Feser got the winner at 11:04 with a wrister from the top of the face-off circle that rang off the post and in, and then just over a minute later Jack Goranson scored by redirecting a pass over Renyard’s shoulder.

Both goaltenders made their share of big saves in the contest, with Lakehead outshooting York 45-27 on the night.

Nine minor penalties were assessed in the match, with York taking only the first and the last, with seven straight infractions called on Lakehead in between.  Neither team was able to score with the man advantage.

The loss drops Lakehead’s OUA record to 7-4 (11-5 overall) and leaves the Thunderwolves tied for fourth place in the West Division.

The Wolves will embark on another three-game road trip next Thursday to Saturday with stops at Guelph, Laurier and Waterloo.