THUNDER BAY – The CP Holiday Train is going to be in Northwestern Ontario on December 3 2015.

Every year the colourful train brings a huge crowd out at the CP Train Station on the Fort William Waterfront.

This year’s musical guests are Kelly Prescott and Devin Cuddy.

There will be a true country flavour to the Holiday Train this year.

Kelly Prescott is a “from the cradle” country singer. She hails from two musically renowned families spanning three generations of country music.

Devin Cuddy has always made music his way, and some might argue, the hard way. As the son of Blue Rodeo’s Jim Cuddy, country rock has been the soundtrack to Devin’s entire life — he was born the same week Blue Rodeo began recording its 1987 debut album, Outskirts. But from the moment Devin was drawn to playing music, he was determined to get as close as possible to the sources of all the sounds he loved, whether they were made by rock and roll’s founding fathers, the Grand Ole Opry’shonky-tonk heroes, or Jelly Roll Morton and the kings of jazz.

All times subject to change… 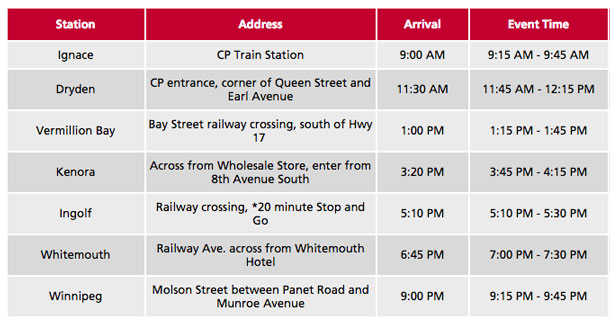