THUNDER BAY – Flood waters caused by rain have impacted the region. Water is rising in response to the rain. The City of Thunder Bay Emergency Committee met at City Hall at 16:00EDT.  There will be an update at 09:00EDT on Tuesday as the Emergency Operations Control Group – on the Rising Water Levels will be held for media.

Across the City calls for service for blocked sewers have come in. Fire Rescue reports that since this morning, the number of calls to them have decreased. Public Works has stepped up. Sources report to NetNewsLedger that Darrell Matson has been going full speed since the emergency started. Now heading into marathon hours without sleep.

Behind the new court house on Justice Lane, the sidewalk beside the transformer where the crane collapsed has caved in. 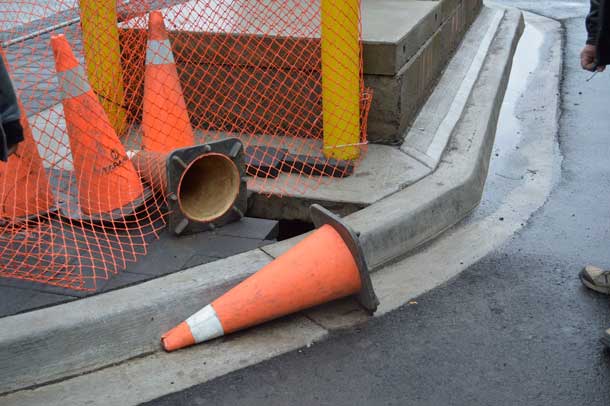 This is near where the crane collapsed on Monday morning.

Fire Crews have remained busy today. Earlier this afternoon, crews responded to the Royal Edward Arms after calls from residents about smoke in the hallways. Crews responded, to discover that an eighth floor suite had a cooking fire where plastic in a pot on the stove caused the smoke.

Do you have images of damage from the rainstorm? Email Newsroom@netnewsledger.com