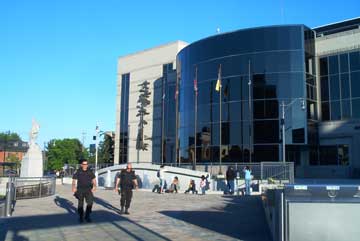 THUNDER BAY – Special to NNL – Summer is rapidly drawing to an end and with it the relative calm that seems to have marked Thunder Bay politics. Come September, Thunder Bay City Council will have a number of issues on its plate while the province will be in the throes of a provincial election. Summer is short in Northwestern Ontario and it is understandable that issues tend to be deferred to the autumn.

One may recall the movie The Agony and the Esctacy where Pope Julius II (Rex Harrison) is continually asking Michaelangelo (Charlton Heston) as he works on the Sistine Chapel as to when he “will make an end”. Come the fall, it will be worth asking City Council as to when they will make an end of a number of issues.

First and foremost, the waterfront. No doubt, the waterfront has been a success in terms of employment creation for local contractors as there seems to be alot of activity with equipment constantly going back and forth and the new pavilions do appear to be nearing completion. At the same time, Phase I is 17 percent over budget

and one should not be surprised if the fall reveals that there is yet another unanticipated increase in the budget for the project in light of recent water main breaks. This first phase was supposed to reach completion late in the fall of 2011 so we shall wait with bated breath to see if the project is on time if not on cost. More to the point,

we are still waiting for an announcement of who the hotelier is going to be and the start of the condo projects.

Construction on the hotel was supposed to start in June and the earth has not started to move yet. It would appear that the City of Thunder Bay and the hotelier have yet to consummate their relationship.

Second, I am looking forward to the first financial report on the status of the city’s investment in equities. As some might recall, rather than the usual assortment of bonds, t-bills and cash, City council decided to put some of the City’s investments in the equities market.

It was a relatively small amount relative to the total portfolio and had grown to about 6.4 million dollars by December of 2010. However, as was pointed out at the time by Councillor Pullia, this was probably not the wisest investment strategy given that markets can go up but they also inevitably go down. Given the drop in the stock market this month, it will be interesting to see how much of a hit they have taken.

Third, City Council seems to have deferred two rather contentious decisions regarding neighborhood development. Unless I have somehow missed their resolution, no decision has yet been reached as to whether a mega Tim Horton’s and hotel will be built in the middle of a residential neighborhood at the corner of Junot and John Street.

As well, the proposed controversial cell phone tower at the foot of Regina Avenue has also been deferred into September. With respect to the proposed Tim Horton’s/Hotel project, one does recall Mayor Hobbs siding with the angry residents at the town hall meeting though Councillors Ruberto and MacKinnon – who were present at the neighborhood meeting – seemed to be more opaque on whether they were for or against the project. No doubt, they may have more to say in the cooler temperatures of fall.

All of these issues of course, will pale in comparison with the aftermath of the provincial election. No matter which party wins the October 6th election, there will be a 14 million dollar deficit to contend with and it is inevitable that any restructuring of the provinces finances will affect its transfers partners.

That is a nice oblique way of saying that municipalities will probably see either a freeze or more likely a reduction in their grants. There will be a certain seasonality to the public finances this year as the summer fiscal largesse of the run up to the election will make an end with the freezes of autumn. Next year will likely not be as good a year for public sector construction projects in Thunder Bay.