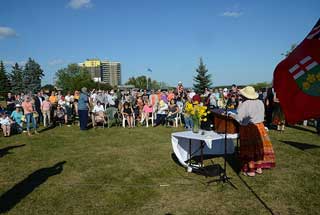 THUNDER BAY – The life of Jack Layton, the leader of Her Majesty’s Loyal Opposition was remembered and honoured tonight in Thunder Bay. The Memorial Service, held at Hillcrest Park overlooking Lake Superior, a non-denominational service was attended by a crowd of almost 500 people. The evening was opened with words of welcome and a prayer from Rev. Jan Stevenson from First Wesley United Church who was leading the service.

“Sacred Spirit, you are revealed to us in the sights, sounds and smells of the creation which surrounds us and gives us life…”

Federal Member of Parliament John Rafferty shared, “Jack was my friend and my mentor. The legacy that Jack leaves behind was that everyone went away knowing Jack was their friend.”

Speaking for Thunder Bay Superior North MP Bruce Hyer was Neil Nelson. “He was a gentle and kind human being,” shared Nelson. Hyer and his family are on a canoe trip in the wilderness north of Armstrong, and it is unknown if the Hyer family is aware of what has happened this week.

Nelson shared how it was in 2005 that Jack and Olivia were with Bruce on a canoe trip to the Wabikimi area, and that was where their friendship was forged deeper, and how Hyer came to run as a candidate for the NDP.

Musician Rodney Brown sang “For Every Season” as a musical tribute to Jack Layton. Friends and supporters sang along with Rodney.

Provincial MPPs Michael Gravelle and Bill Mauro were on hand to express words of tribute to Jack Layton. Michael Gravelle shared how when he heard the news of Layton’s passing at the AMO Conference on Monday morning in London, “It was like the world stopped”. Gravelle said, “Partisanship is out of politics this week.”

Bill Mauro commented that his first memory of Jack Layton was “This buzzsaw of a man working at the Federation of Canadian Municipalities”.

“The common demoninator was Jack Layton’s energy and enthusiasm,” added Mauro. “Cancer is an unfair and insidious disease, and sixty-one is far too young to lose anyone”.

There was a long line-up of people who were signing the Book of Condolences sharing their thoughts and memories of the NDP Leader.

Perhaps the evening’s mood could be summed up with the words of Dorothy Chambers who attended the service representing the military. Chambers said, “Rest in Peace Good and Faithful Servant”.

The United States Under Secretary for Public Diplomacy and Public Affairs issued a public statement on the passing of Jack Layton;

“We offer our deepest condolences to the people of Canada on the passing of Canada’s official Opposition party leader, Jack Layton.

“Canada has lost a dedicated political activist committed to promoting a platform of social justice through compromise, tolerance, and hope. A humble public servant, Mr. Layton was a man of principle, an optimist, and a pragmatist. He helped build the New Democratic Party into a vital force in Canadian politics.

“He believed in standing up for those who could not stand up for themselves, and he was a proud Canadian who always practiced civility in politics. Just before his death, he left us with the following words: “Love is better than anger. Hope is better than fear. Optimism is better than despair. So let us be loving, hopeful and optimistic. And we’ll change the world.”

“Jack Layton embodied the values that we should all strive to uphold. Our thoughts and prayers are with his wife, Ms. Olivia Chow, and his family”.

The State Funeral for Jack Layton will be held in Toronto on Saturday. The funeral will start at 2:00 PM. There will be eight hundred seats inside of the Roy Thomson Hall which are set aside for members of the public on a first come, first served basis. There will also be four outdoor video screens which will be set up at David Pecaut Square, just to the west of Roy Thomson Hall for overflow crowds.

There are a total of one thousand seven hundred seats which will be reserved for members of the Layton family, Members of Parliament, Premiers, former NDP premiers, and other special guests.