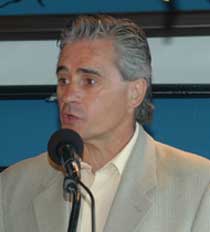 Here is the transcript of Mr, Mauro’s Member’s Statement:

I’m fortunate to have within my riding the George Jeffrey Children’s Centre. The centre, funded by the Ministry of Children and Youth Services, offers programs and services that help to meet the physical, developmental and social needs of children of all ages and abilities in northwestern Ontario.

On December 12, 2008, which was the centre’s 60th anniversary, they held the official grand opening of their spectacular newly constructed facility. This 34,000-square-foot centre was an $11-million project, and I’m very proud to say that our government contributed roughly $7.3 million toward the construction of this spectacular facility. I want to congratulate CEO Eiji Tsubouchi; Bob Speer, the president of the board; and all of the staff and board members for their efforts related to the fundraising and building campaign.

In addition to the roughly $7.3 million for the new building, our government also contributed approximately $500,000 toward the base budget of this centre. And just last month, in our budget, we announced another increase into the operating budget for children’s centres in Ontario. For the centre in my riding, this recent announcement was around $280,000 annually, making the overall increased operating funding for the centre almost $800,000 higher every year than it was just a few short years ago. The George Jeffrey Children’s Centre is now extremely well positioned to serve the needs of the children of northwestern Ontario for decades to come.