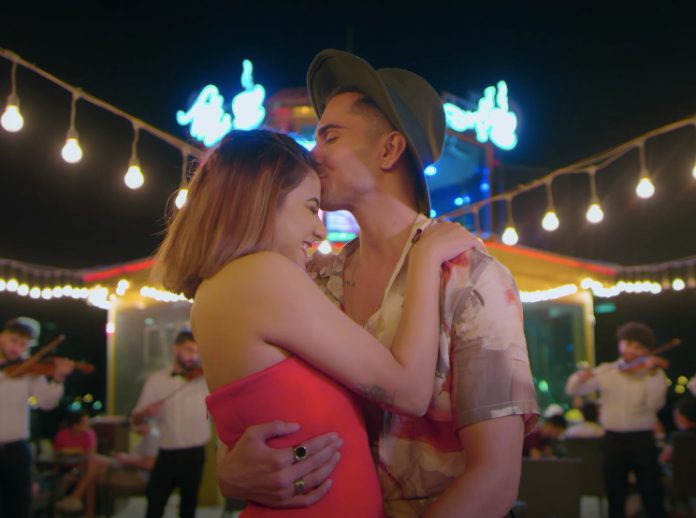 *The music scene has changed tremendously in recent years with, the emergence of rappers, folk artists, pop artists, and many more talented performers. Joining the league is the chocolate boy from Instagram Anirudh Sharma. Anirudh kick-started his dream run as a dancer-cum-influencer and who knew this lad has hidden singing talent. Marking the birthday of his better half Mrunal Panchal, Anirudh has released his debut song titled Tom Cruise. *

Anirudh’s gift has swept Mrunal off her feet. She is at cloud nine and the vibrant, pop poster has garnered everybody’s attention and appreciation. The couple look beautiful together, Mrunal looks ravishing in red while Anirudh in Havana prints and that hat totally marks him as the gen-next popstar.

The peppy Punjabi song is sung by Anirudh Sharma and it features the cute couple. Tom Cruise is shot in Dubai for over two days. The debut song of Anirudh is produced by Mr.Himanshu Shekhar and directed by Mr.Ashish Rai.It’s a project by Manpreet Kaur. Raas and Shekhar have penned the pop song and the beats are composed by Vylom. Tom Cruise has been released by the label OSM Records owned by Himanshu & Manpreet.
The internet is flooded with wishes and praises for the duo and the team. The teaser shattered all the records and the song has superseded the expectation of the crowd and the cute influencer couple. Mrunal and Anirudh have time and again expressed their love and chemistry in the song, and adding to it,Manpreet, a renowned name in the Punjabi music industry have also marked her presence via a cameo playing a pivotal character. Thus, making this song a big step in their career and life.

Talking about the label, the pioneers are Mr.Himanshu Shekhar and Miss Manpreet Kaur. OSM is label, who looks after a raw talent and tries to nuture the same by giving them oppurtunities which is reflected in the personality of Mr.Himanshu and Miss.Manpreet as well. A proper example for the same is Anirudh Sharma.

Talking about Mrunal and Anirudh, The cute power couple is known for their cute chemistry and the song justifies it totally. Both look elegant and stylish at the same time, the younger generation idealize them as a couple holding on to each other with so much love and affection. The peppy beats and the moves of Anirudh to woo Mrunal are loved by everyone. With over more than lakhs of views in 13 minutes, Tom Cruise is set to be a blockbuster.