THUNDER BAY – Thunder Bay Fire & Rescue (TBFR) responded to a multiple alarm basement fire in the 200 block of Wilson Street at approximately 5:00 pm Sunday evening. Initial reports from Fire dispatch indicated that a smoke alarm was going off in the building. However, when the initial TBFR crew arrived on scene they encountered a developing fire in the basement of the multiple occupancy three-story structure. A second alarm was immediately ordered by the on-scene TBFR commander.

TBFR crews immediately deployed multiple hose lines to direct their fire attack through a basement window to knock down the fire in the basement within seconds of arriving on the scene. Quick and aggressive efforts by fire crews were followed by an interior search and fire attack to completely extinguish the fire in the basement of the structure and to search the remainder of the building.

This was to ensure all occupants were out of the home and to prevent fire extension from damaging the rest of the occupancy. It was later determined that all occupants of the structure had self-evacuated prior to the arrival of TBFR crews.

TBFR is holding the scene until an investigation into the fire’s cause can be completed. The occupants of six apartment units in the structure have been displaced by the fire and have been put in contact with Red Cross who are working with the landlord to ensure they will have safe refuge until they can return to their units in the building.

A total of 5 pumper/rescue trucks, 1 aerial ladder, and 1 Command vehicle were required at this incident to bring it under control. 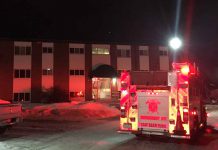 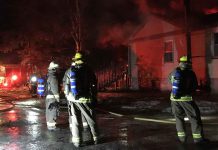