THUNDER BAY – At approximately 1:25 PM on Friday, June 12, 2020, Thunder Bay Fire Rescue responded to a report of smoke coming from an apartment on the seventh floor of an apartment complex at the 300 block of Adelaide Street on the city’s northside.

The first arriving unit perceived no smoke coming from the building and proceeded to the 7th floor.

On the 7th floor, crews observed light smoke coming from an apartment and donned their Self Contained Breathing Apparatus (SCBA) to investigate

At that time the first crew called for a second alarm. The source of the smoke was the bedroom where a burning mattress was discovered.

Water was quickly applied and the fire knocked down.

Other responding units evacuated tenants that were in the halls, and in adjacent units to the involved apartment.

Due to a large number of elderly occupants, shelter in place was also utilized to ensure occupants were not exposed to smoke in the hallways and stairwells.

Ventilation was set up and the fire floor cleared of smoke.

No one was present in the apartment at the time of the fire and no injuries reported.

The cause is under investigation.

TBFR wishes to remind Thunder Bay residents of the importance of smoke alarms. 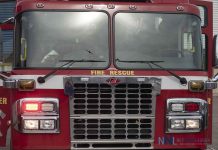