THUNDER BAY – Elections bring out both the best and sometimes the worst in people. The political views we all hold are often deeply held. Sometimes voting is a generational thing with people voting for a particular party because their parents, and sometimes grandparents voted for that party. That said, what is great about Canadian elections is that each person is entitled and can have their views respected.

One of the sadder parts of election campaigns is sign vandalism. It is a cowardly way of protesting, in my opinion. If you don’t like a particular political party, get out there and volunteer for a political party you do like and can support.

Across Thunder Bay, there are increasing incidents of election sign vandalism.

Now, not only is vandalizing election signs cowardly in my view, but it is also a criminal offense.

Section 325 of the Canada Elections Act states that, during an election period, no one may interfere with the transmission of election advertising, such as a campaign sign.

Prohibition — prevention or impairment of transmission

If you are not sure whether the sign is on private or public property, check with your municipality or other government agency.

NetNewsLedger has pledged that if our staff see vandalized election signs we will contact the candidate’s office an let them know. 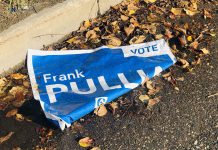