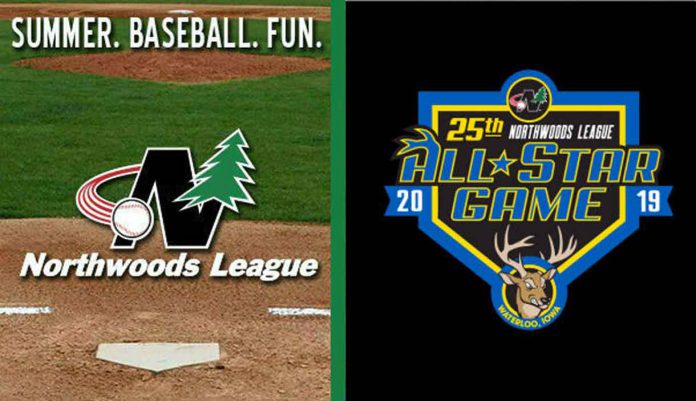 Rochester, Minn – Justice Bigbie (Western Carolina) of the Madison Mallards went 2-4 with two home runs and three RBI while leading the Great Lakes Division to a 5-2 victory over the Great Plains Division in the 2019 Northwoods League All-Star Game. Bigbie earned “Star of Stars” honours for his monster performance.

The 25th edition of the Northwoods League All-Star Game, held at Cost Cutters Field at Riverfront Stadium, was preceded by the Home Run Derby. A thrilling Derby ended in a tie between the two divisions with 11 apiece. Thunder Bay’s Jake Engel (Dixie State) won the individual crown with five home runs.

The Rafter’s Neil Abbatiello (Wagner) earned the win by covering the next two-thirds of an inning. The Great Plains struck back with the first of two RBI singles off the bat of Bismarck’s Wyatt Ulrich (St. John’s MN) in the second, scoring Duluth’s Nic Kent (Virginia) after the latter’s double.

Bigbie hammered a two-out solo home run in the third, stretching the lead back to two. Ulrich responded with another run-scoring single in the fourth to score Kent, following a third in which he wowed the crowd with an inning-ending diving catch in center.

Great Lakes pitching dominated the rest of the way, totalling 11 strikeouts throughout the evening and working at a staff whiff rate of 14.7%. A.J. Archambo (Oral Roberts) of Madison earned the save by recording the final two outs, striking out one. The Lakeshore Chinooks’ Will Klein (Eastern Illinois) opened eyes by hitting 100 miles per hour on his fastball while striking out both batters he faced.