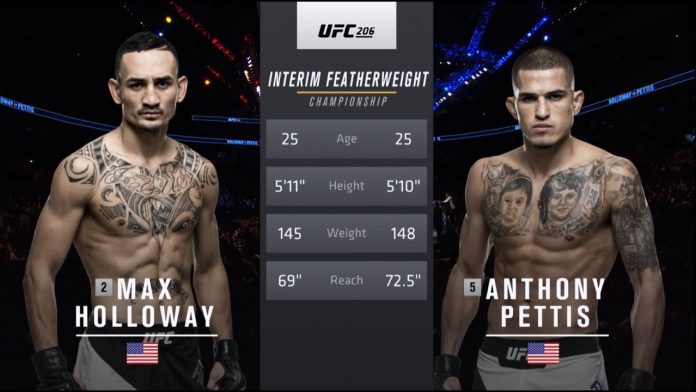 EDMONTON – UFC 240: Holloway vs. Edgar is shaping up as a promoter’s dream, given the contrasts between the two main fighters.

UFC 240will take place July 27 at Rogers Place in Edmonton, Alberta. It will mark the first big UFC event in Canada since Holloway defeated Brian Ortega by TKO (doctor stoppage) in the fourth round at Toronto’s Scotiabank Arena on December 8 last year.

With the big bout just around the corner, we thought we’d bring you some of the best UFC 240 odds. If you’re interested in learning more, for UFC betting predictions click here.

Online bookmakers have installed Max Holloway as the favourite to win the UFC 240 headline event and maintain his featherweight title. At the time of writing, bet365 was paying 1.25 for a Holloway victory, with Edgar the rank underdog at 3.90.

Other Fights on Main Card Sure to Attract Attention

There are four other fights on the main card for UFC 240. Although none of them are for a championship belt, there is still sure to be plenty of interest around these fights. The main card features Cris Cyborg vs Felicia Spencer in the women’s featherweight, Geoff Neal vs Niko Price in the welterweight, Olivier Aubin-Mercier vs Aman Tsarkuyan in the lightweight, and Marc-Andrew Barriault vs Krzysztof Jotko in the middleweight.

The Jotko-Barriault bout is shaping up as a tough one to call, with Jotko a 1.53 favourite compared to Barriault’s 2.45 odds at the time of writing. It’s easy to see why these two are closely matched, given Jotko has a 20-4 record across all MMA fights and Barriault an almost identical record percentage-wise with an 11-2 MMA record. This will be Barriault’s second appearance in the UFC after falling short in Ottawa against Andrew Sanchez by unanimous decision. Jotko has a 7-4 record in UFC, which is the main reason he’s been given the tag of favourite ahead of this bout.

After the headline act, the Neal-Price bout will probably carry the greatest interest. Neal is currently a 1.36 favourite with Price the 3.00 outlier. These two sluggers have similar records, with Neal coming in with an 11-2 win-loss record and Price a slightly superior 13-2 record. They’re fairly well-matched in other statistical areas, with Price just one year older (29 vs 28), a couple of inches taller (6 ft vs 5.9 ft, and with one inch more reach (76 in vs 75 in).

All the fights on the UFC 240 main card should make for fascinating viewing, and fans can bet on all the results at the top online bookmakers.