THUNDER BAY  – The Thunder Bay Queens announced Tuesday their respective recipients of the CCM Hockey performer awards for the first half of the 2016-17 season.

Together they have posted 18 shutouts to date along with a goals-against average of just over 1.00 per game.

Their strong showing in net has been a big reason for the team’s success during the first half of the campaign.

Of note, the Sportop midget AA Queens are also off to Faribault, Minn., this weekend for a three-game set with the Shattuck-St. Mary’s Sabres prep school under-16 side.

The two clubs will play at 11 a.m. and 6 p.m. Saturday at the SSM Ice Arena before finishing up the series at noon Sunday.

TOPPER’S PIZZA MIDGET A: Cameron Ivall (G) – Now in her third year with the midget A program, Ivall consistently stands tall between the pipes, not only in key games but every time she skates to her net.

Her sense of humour and smile is always present no matter what and she is a true leader amongst her peers and an asset to her team.

Ivall manages to balance school where she is on the honour roll, hockey, and high school sports while still having time to display her artistic talents.

She is a graduating player at the end of the season with plans to move on to study Interactive Media Development at Confederation College.

Nicol provides an excellent example of leadership, skill set and a positive example for the squad both on and off the ice.

Among the scoring leaders, Nicol is a go to player on the team ready to do whatever it takes to provide her team with the opportunity to win.

TIM HORTONS BANTAM A: Marissa Brosseau, (G) – A key cog in the success of the bantam A Queens this season has been due to the play of their goaltender Brosseau.

She has consistently been one of the best performers on the club in the first half of the season while playing well and often being the difference maker.

She is a very hard-working and consistent player for the peewees and comes to play and compete in every practice and game.

CCM is the legendary hockey brand that has been rooted in performance for over a century. CCM Hockey offers the innovation and performance that will help write the next chapter in the history of the game. … Your legend starts here. 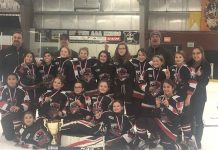