PARIS (Reuters) – France’s government sought on Tuesday to reassure the public about safety during year-end festivities after a suspected militant attack on a Christmas market in Berlin, saying security forces were working round the clock to prevent such violence.

French Interior Minister Bruno Le Roux met his German counterpart in Berlin hours before a truck mowed into crowds at a Christmas market there on Monday evening, killing 12 and injuring dozens more in what police say was a suspected terrorist attack.]

The Berlin incident revived memories of the attack last July 14 in which a man drove a large truck into crowds of people celebrating the Bastille Day national holiday in the French Riviera city of Nice, killing 86.

Le Roux urged people to go out and party despite security fears, saying everything was being done to ensure protection, notably at hundreds of outdoor markets that draw millions of people into the streets at Christmas.

“Police and intelligence are on the job 24 hours a day. Protection is guaranteed. I want people to go out and enjoy themselves,” he told Europe 1 radio.

He headed to Strasbourg in northeastern France to one of Europe’s oldest Christmas markets, a sprawl of festive food, gift stalls and lights that draws about two million people ahead of Dec. 25, one of the main dates on the Christian calendar.

There are hundreds of similar markets across France, as in other European countries such as neighbouring Germany.

“We’re not going to give in to blackmail and terrorism,” said Strasbourg Mayor Roland Ries. “That would be tantamount to handing victory to them and their propaganda battle against the West.”

Large barriers had been erected to prevent vehicles entering the market zone in the ancient centre of Strasbourg, much of which is surrounded by canals and bridges, with security checks on people entering, Ries said.

More than 230 people have been killed in Islamist attacks over the last two years in France, including 130 in Paris by suicide bombers and gunmen in November 2015 – an assault for which the Islamic State militant group claimed responsibility.

Deployments of soldiers and police to sensitive sites such as airports and railways was boosted to 10,000 in the wake of the 2015 attacks, but later pared back to 7,000. Le Roux said the other 3,000 were on standby for year-end operations. 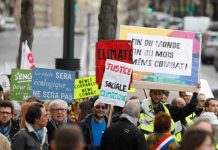