THUNDER BAY – NEWS – Thunder Bay has a very dubious distinction. The city, to the surprise of no one is the Murder Capital of Canada for 2014. In the past year, Statistics Canada show that Thunder Bay has climbed the rankings to Canada’s fourth most dangerous city, up from the city’s eighth place ranking last year. Crime in Thunder Bay increased by ten per cent in 2014.

The figures on homicide were expected, as Thunder Bay had eleven homicides reported in 2014. However increases in property crime and other crimes in the City of Thunder Bay bucked the national trend. Across Canada crime declined by three per cent, but increased in the city.

The good news so far in 2015 is that there has only been one homicide.

The Thunder Bay Police Service reports the following national figures for where the city is in term of crime:

Statistics Canada reported that “The Crime Severity Index (CSI) measures the volume and severity of police-reported crime. From 2013 to 2014, the CSI decreased 3%, which was primarily a result of fewer incidents of breaking and entering, and robbery. The decline in the CSI in 2014 represented the 11th consecutive decrease. This was the lowest index level recorded since 1998 (the first year for which CSI data are available). 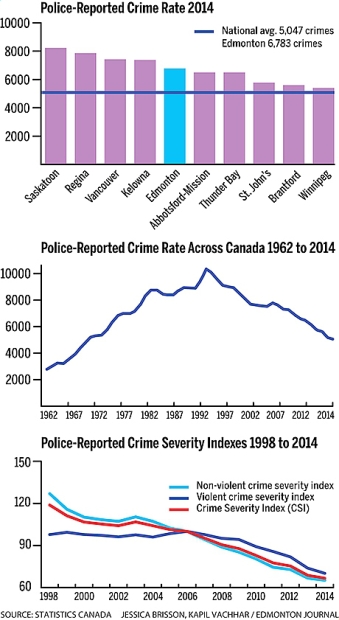 Both the police-reported CSI and crime rate declined in most of the provinces and territories in 2014. Among the provinces and territories that recorded a decline in the CSI, fewer incidents of breaking and entering largely contributed to the decrease. In Saskatchewan, however, the decrease in the CSI was primarily related to a decline in police-reported incidents of the trafficking, production or distribution of cocaine.

In contrast with the decreases in most provinces and territories, Yukon’s CSI was up 11% from 2013 and its crime rate was stable, while both the CSI (+3%) and crime rate (+2%) in British Columbia increased from the previous year. The increase in Yukon’s CSI was driven primarily by more homicides, while several violations contributed to the increase in British Columbia (that is, theft of $5,000 or under, child pornography, breaking and entering and theft of a motor vehicle). In addition, Alberta’s CSI increased slightly (+1%) from 2013 to 2014, while its crime rate was stable.

Prince Edward Island recorded the largest drop in both the CSI (-17%) and the crime rate (-20%) from 2013 to 2014. The drop in Prince Edward Island’s CSI was driven primarily by fewer thefts of $5,000 or under and breaking and entering.

Police reported about 369,500 violent incidents in 2014, approximately 15,000 fewer than the previous year. Violent crimes continued to account for about one-fifth of all police-reported Criminal Code offences (excluding traffic) in 2014.

Coinciding with the overall drop in violent crime, rates for most violent violations decreased in 2014. However, the overall number of homicides edged up from 512 in 2013 to 516 in 2014. Despite the slight increase in homicides, the homicide rate (1.45 homicides per 100,000 population) was virtually unchanged from the previous year.

Police-reported sexual violations against children up from 2013

The increase in sexual violations against children was primarily the result of incidents of luring a child via a computer (including the agreement or arrangement to commit a sexual offence against a child), which increased from 850 incidents in 2013 to 1,190 incidents in 2014.

Various factors could account for the increase in sexual violations against children, such as specialized units within a police service to proactively investigate this type of crime.

In 2014, most crime reported by police continued to be non-violent in nature. Police reported approximately 1.4 million non-violent incidents in 2014, of which about 1.1 million were property crimes.

The non-violent CSI, which accounts for both the volume and severity of police-reported non-violent crime, decreased 2% from the previous year to 65.2 in 2014.

All of the territories and every province except British Columbia (+6%) and Alberta (+1%) recorded a decrease in their non-violent CSI in 2014. The gain in British Columbia’s non-violent CSI was the result of increases in several violations, including theft of $5,000 or under, child pornography, breaking and entering and motor vehicle theft.

While the rates for most non-violent Criminal Code violations (excluding traffic) decreased in 2014, increases were recorded for certain forms of property crime, including identity fraud (+8%), fraud (+2%) and motor vehicle theft (+1%). In addition, among the violations that fall under the category of other Criminal Code offences, significant increases were recorded in the rate of child pornography (+41%), as well as violations related to terrorism (+39%).

Incidents related to accessing, possessing, making, printing or distributing child pornography continued to rise, up from approximately 2,800 incidents in 2013 to about 4,000 incidents in 2014, resulting in a rate of 11 incidents per 100,000 population. Similar to sexual violations against children, various factors could account for the increase in child pornography, including specialized units within a police service that proactively investigate this type of crime.

Police reported 100 incidents related to terrorism in Canada in 2014, which was 29 more than in 2013. While this resulted in a 39% increase in rate, it remained below 1 incident per 100,000 population. The increase was primarily attributable to new terrorism violations (for example, leaving Canada to participate in the activity of a terrorist group) that were added to the Criminal Code of Canada part way through 2013, as well as an increase in violations related to facilitating terrorist activity.

Fewer youth accused of crime in 2014

Both the police-reported youth CSI and the rate of youth accused of crime decreased by 9% in 2014, representing the fifth consecutive annual decline for both measures of youth crime. Compared with a decade ago, the youth CSI was 40% lower in 2014, and the rate of youth accused of crime was 42% lower. Youth accused include those aged 12 to 17 years who were either charged by police or not charged as a result of the implementation of alternatives under the Youth Criminal Justice Act (for example, warnings, cautions or referrals to community programs).

Declines in youth accused of crime were seen among almost all types of violations, including all forms of property crime. For instance, the police-reported rate of youth accused of theft of $5,000 or under (-4%) and mischief (-13%), two of the most common violations among this age group, declined from 2013 to 2014.