Home Anishinaabe Survival International – The Dark Side of Brazil

LONDON – International News – Nixiwaka Yawanawá, an Amazon Indian from Brazil, greeted the World Cup trophy on its arrival in London with a T-shirt saying ‘BRAZIL: STOP DESTROYING INDIANS’. Sporting his tribe’s headdress and facial decorations, Nixiwaka drew attention to Brazil’s attacks on the rights of its indigenous population.

Coca-Cola and FIFA prevented Nixiwaka from displaying the full message on his T-Shirt while standing next to the trophy.

In the run-up to the FIFA World Cup in June 2014, Nixiwaka and Survival International are highlighting that five hundred years after colonization, Brazilian Indians are still being killed for their lands and resources. While Brazil is presenting itself as a multi-cultural democracy and claims to host a World Cup ‘for everyone’, the government and landowners plan to open up Indian territories for massive industrial projects.

A proposed constitutional amendment would give Brazil’s Congress – heavily influenced by the anti-indigenous farming lobby – a say in the demarcation of indigenous lands. This would mean further delays and obstacles to the protection of the Indians’ ancestral land. 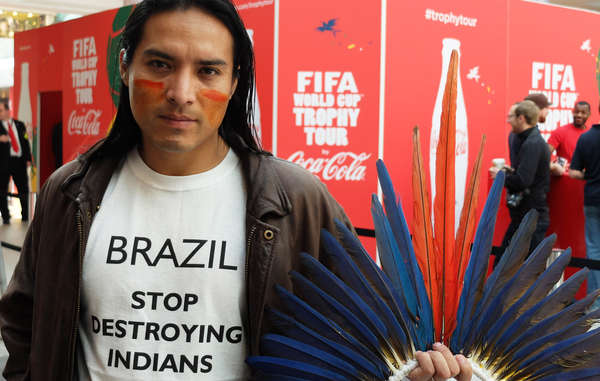 Another controversial bill would open up indigenous territories for mining, dams, army bases and other industrial projects. Indians across the country are vociferously protesting against these plans.

The changes would be disastrous for uncontacted Indians living in Brazil’s Amazon rainforest. The demarcation and protection of their land is vital for their survival as they have no immunity to diseases transmitted by outsiders and any form of contact threatens to drive them to extinction. Many of the uncontacted Indians are facing brutal attacks by illegal loggers and miners who invade their territories.

Nixiwaka said, ‘In 2014 the world’s eyes are on Brazil for the FIFA World Cup – a good opportunity for us to show the international community the struggle for our lands. We need everyone’s support to save our rainforest; we depend on our forest for our survival. I hope that the Brazilian government will take the lead in respecting indigenous rights to lands, and others will follow suit.’ 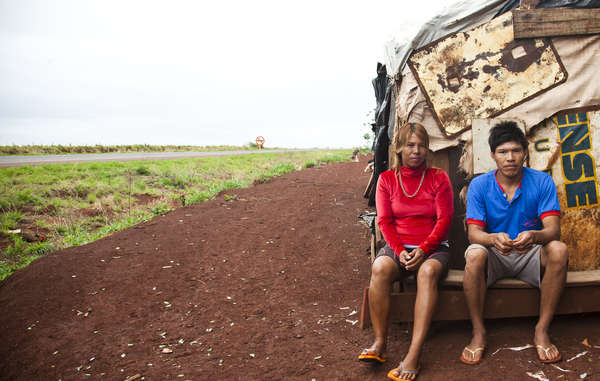 Having lost most of their land to cattle ranchers and sugar cane plantations, many Guarani are forced to live by the side of the road. © Paul Borhaug/Survival

Brazilian tribes such as the Guarani have been waiting for the demarcation of their land for many years. Having lost most of their ancestral land to cattle ranchers and sugar cane plantations, they are forced to live in dangerous and squalid conditions on road-sides or in overcrowded reserves. They face malnutrition, poor health and alcoholism and their leaders are frequently targeted and killed by ranchers’ gunmen.

Coca-Cola, the promoter of the trophy tour and one of the biggest sponsors of the World Cup, has recently been dragged into the Guarani’s land struggle, as a report revealed that it is sourcing sugar from US food giant Bunge – which in turn buys sugar cane from farmers who have taken over Guarani land.

A Guarani spokesman told Survival International, ‘Coca-Cola must stop buying sugar from Bunge. While these companies profit, we are forced to endure hunger, misery, and killings’.

Survival’s Director Stephen Corry said today, ‘Brazil is frequently celebrated as an economic success story – never more so than in the run-up to the World Cup. But it’s only fair to acknowledge that its economic growth is incurring an immense human cost: the death of hundreds of thousands of indigenous people over the last century, and the annihilation of entire tribes. It’s time to recognize the dark side of Brazil.’

World Cup: Who are the tournament favorites’ likely opponents in the last 16?

FIFA World Cup 2022 in Qatar: Everything You Need to Know

Blatter and Platini Banned from FIFA for Eight Years