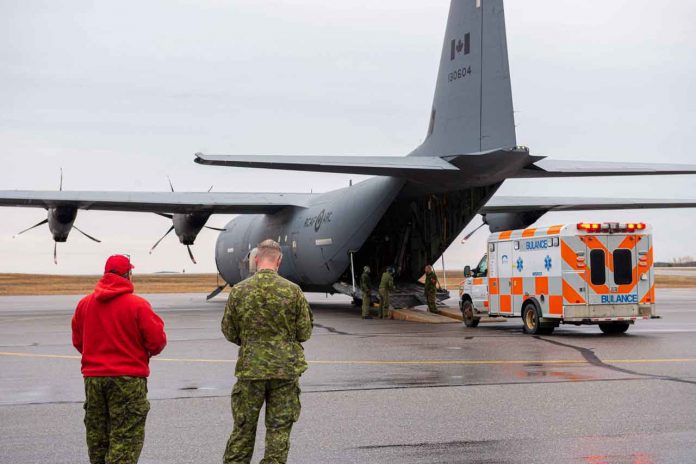 The Commanding Officer of Ontario’s 3rd Canadian Ranger Patrol Group (3 CRPG) says recent Canadian Ranger assistance during a Canadian Armed Forces operation to deliver two ambulances to a First Nation community shows again how adept Rangers are at responding to the needs in the North.

“Pikangikum Band and Council submitted a request for assistance to the Government of Canada because their ambulances were no longer serviceable resulting in potential immediate health concerns within the community. Two ambulances were sourced from Kenora Ontario and were quickly moved to Dryden Ontario. Since most of the year the community is only accessible by ferry barge or ice road in winter, the ambulances needed to be flown in,” said Lt.-Col. McArthur.

Pikangikum First Nation is home to 2,400 Ojibwe residents north-west of Sioux Lookout. “The Ministry of Transportation did not have the size of aircraft needed” said Lt.-Col. McArthur. Therefore, the Royal Canadian Air Force were requested to transport the ambulances using a C-130 Hercules, based out of Canadian Forces Base Trenton.

According to the Ministry of Public Safety, the aging ambulances simply wore out from use.

3 CRPG personnel were tasked with supporting the delivery of these ambulances and assisting with the safe unloading of the ambulances while the C-130 was on the taxiway.

“It’s a straight forward task for us. It’s another example of how Rangers can be quickly stood-up to be part of a solution,” said. Lt.-Col. McArthur.

Canadian Ranger Eli Owen from the community’s local Patrol participated in the operation and said the ambulance delivery went without incident.

“We were standing near the Hercules and were told not to let anyone near it. It went very smooth,” said Owen.

The Canadian Rangers are a 5,000-member sub-component of the Canadian Armed Forces’ primary reserve, whose mandate is to provide military presence in Canada’s far north. Members assist with search-and-rescue, other domestic operations, and serve Canadians in sparsely populated northern territory. Many members are Indigenous and First Nations, and serve in the communities they live.

Canadian Rangers rescue hunters when their boat engine breaks down