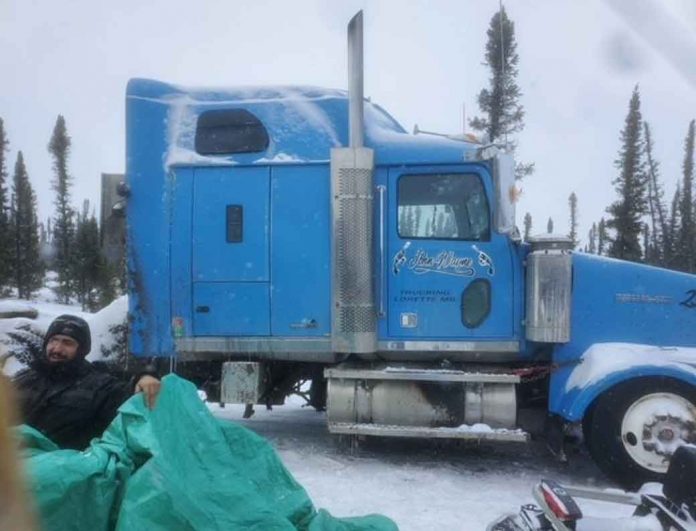 Two truck drivers travelling to Manitoba on the Fort Severn First Nation winter road were forced to spend two nights in their tractor trailer cabs before being rescued by members of Ontario’s Canadian Rangers after the rigs became stuck as a spring storm raged.

Canadian Rangers based in the Cree First Nation community of Fort Severn were activated, but after assessing the road and weather, they too determined a rescue at that time was unsafe.

“All three emergency response agencies, including the Rangers, determined that the storm made a rescue attempt unsafe for emergency personnel,” said 3CRPG spokesperson Lieutenant Camilo Olea.

The following day when the storm briefly subsided, the Rangers were informed by the OPP that a helicopter would be sent to rescue the truckers and 3CRPG assistance was no longer needed. However, it was Friday, April 15 before 3CRPG were informed that the helicopter would not be coming, as it had already picked up other stranded motorists on the winter road, said Olea.

“The truckers had fuel, but their food and water supplies were getting low, so it was decided to send the Rangers,” he added.

Three Rangers departed Fort Severn on snowmachines in 70 to 80 km/h wind gusts and driving snow to make the 12-hour round-trip to rescue the truckers, who had now spent two nights in their truck cabs.

The Rangers, carrying warm clothes, food, and first-aid gear, reached the truckers around 6 p.m., and reported back to a command post monitoring the rescue in Fort Severn that the drivers were in “good spirits.”

“We wanted to go because we heard one of the truckers had a medical condition. Visibility was less than 100 metres, and we had to snowmobile through four feet of loose (snow) powder at times,” said Fort Severn Patrol Sergeant Chris Koostachin.

When the Rangers reached the truckers, Sergeant Koostachin said the truckers had exhausted all their food and water, and the group decided to proceed 35 km towards Fort Severn and stop at a vacant cabin for the night. However, once at the cabin the group then decided it was best to proceed back to Fort Severn, where they safely arrived around midnight.

“I am proud of the Rangers and I am glad it turned out well. We are not first responders, but a lot of the time we are the first who can respond,” said 3CRPG’s Commanding Officer Lieutenant-Colonel Shane McArthur

The Canadian Rangers are members of the Primary Army Reserve. Members are predominantly First Nation and live and serve part-time in their Far North communities.