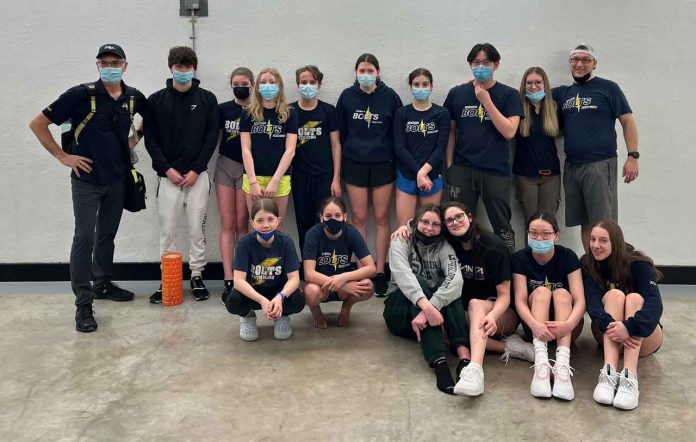 THUNDER BAY – SPORTS – This past weekend, 12 ThunderBolt swimmers travelled to Winnipeg Manitoba to compete in the ManSask Winter Provincial Championships.  Swimmers from across the prairies and Northwestern Ontario competed at the annual event.

“The return of the ManSask competition for the Thunderbolts after a two year lockout was extremely fun for swimmers and parents alike but also produced numerous medal performances, best times, qualifying times for future events and even a new all-time team record for Kaitlyn Luu in the 100 meter butterfly,” stated interim Head Coach Andy Ritchie.

Kaitlyn Luu, one of three ThunderBolt gold medal winners says,”It feels great to be back in the water racing with my teammates.  It was so fun to race against all the best swimmers in Manitoba and Saskatchewan.  I am very happy with how I performed, especially when I set a new ThunderBolt club record in the 100 meter butterfly. Our team had a great performance and I am very proud of all my teammates,” added Luu.

“I had one goal this weekend – to qualify for the Spring Festivals swim meet,” stated young Sierra Bourgeois.  “I exceeded my expectations by qualifying in 5 events, and winning several medals.  I was especially happy to get the chance to bond with my teammates and I am looking forward to the next swim meet,” added Bourgeois.

Coach Brooke Hulina was extremely pleased with the weekend results.  “The teamwork that was demonstrated by the ‘bolts at the meet was exemplary. We got to see the kids be a team again as the health restrictions were lifted,” stated Hulina.

“The swim meet ended on an extra fun note when in partnership with the Northwest Narwhals-the other Thunder Bay Swim Club, the girls 11- 12 team captured the gold medal in the 4 x 50 medley relay inter-Provincial challenge between Ontario, Manitoba and Saskatchewan! It was super exciting to watch,” added coach Ritchie.