By Elizabeth May MP

OTTAWA – POLITICS – I will never criticize cooperation across party lines. But I am so disappointed that the NDP have given Justin Trudeau a blank cheque – a promise to vote for the next four budgets – sight unseen.

We now know the next budget will include a massive increase in military spending and an increase in oil and gas production. This was not unveiled in Parliament, but broadcast to us from Brussels as Justin Trudeau met with fellow NATO leaders. I guess any NDP MP who once thought they could push back on militarism and act on climate traded in their backbone, as well as their vote.

Mind you, I am entirely inspired by the resistance of the people of Ukraine and their courageous president, Volodymyr Zelensky. It was an enormous honour to speak to President Zelensky thanking him for his historic speech in our Parliament. 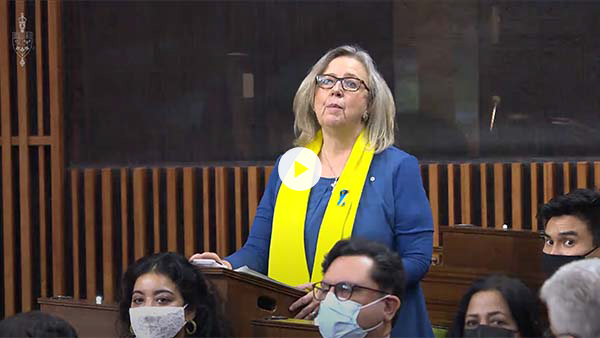 We must do more to support Ukraine – by imposing sanctions on Russian oligarchs, shutting down Russian oil, and exerting every effort to stop the war. Across Canada, assets of Russian billionaires remain untouched. We should seize their yachts and properties (including a huge mansion on the coast in my riding).

It is not news that Jagmeet Singh does not understand the climate emergency. He ducks for cover every time a Green MP asks if he would cancel Trans Mountain or ban fracking. The NDP has held the balance of power since 2019 and has put forward its demands to the Liberals on every confidence vote. Not once has Mr. Singh included climate action in the price of his rubber stamp.

But last week’s supply-and-confidence deal is even more shocking. No mention of proportional representation. No mention of confronting the opioid crisis. And for me the climate impact is absolutely devastating – a free ride for Liberals until 2025, by which time the chance of holding to 1.5 degrees C will likely have slipped away.

We can secure a livable future. I think we all feel deep levels of disequilibrium across multiple aspects of life on Earth. The pandemic. The escalating climate emergency. The war.  All suggest we are nearing tipping points. These critical points of disruption could go either way. We need to ensure humanity lands on the road to survival.