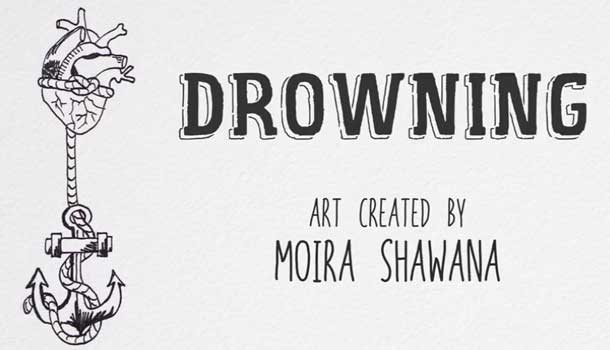 THUNDER BAY – ENTERTAINMENT – Shayne and Taylor May, two sisters from the Wikwemikong Unceded Indian Reserve on Manitoulin Island are living out a dream with the debut of their first single “Drowning,” produced by Ashley Buchholz, lead singer and guitarist from Toronto-based USS – now available on iTunes. Proceeds from the sales on iTunes will be donated back to the Wikwemikong community.

The song was written earlier this year as a part of “The Music Business” program offered at Wasse Abin High School since 2013, and in collaboration with Coalition Music and TEMPO (Through Education Music Provides Opportunity), the company’s charitable arm. The Toronto-based music company, which manages the careers of USS, Simple Plan, Our Lady Peace and Andee, established TEMPO as a means to offer this course to students via the Toronto Catholic District School Board and Wexford Collegiate School for the Arts (Toronto District School Board). The Music Business, now in its fourth year, has been offered at no cost to high school students in Toronto since 2011.

“Without this program being offered at our school, we would never have had such an amazing chance to be heard and to learn all that we did about the music industry. We’re grateful to Coalition Music and to Ashley for helping us to fulfill this dream,” explains Shayne.

“We were given the opportunity to workshop with the class at Wasse Abin and to help them explore the expression of songwriting. Shayne and Taylor shared a very strong song idea with us and we really wanted to help them finish it,” says Buchholz.

The Music Business is an inter-disciplinary Grade 12 credit course which complements traditional high school music classes. Throughout the semester, professional artists and Coalition Music staff members travel to the First Nations’ high school to work with students on a blend of songwriting, collaboration, business concepts and entrepreneurship.

The members of USS joined Coalition Music staff for a visit last March where they first met Shayne and Taylor and the rest of the class. “Drowning” was recorded at Coalition Music Studios last June when the Wasse Abin class visited Toronto, and was commercially released on October 22. A video of the making of the song can be seen on YouTube and Moirah Shawana, a classmate, illustrated the lyric video created to accompany the song.

“The recording of “Drowning” has given these students the chance to truly and freely express themselves and to be heard beyond the boundaries of our community,” said Jason Thibault, Head of Business Studies at Wasse Abin High School.

“At Coalition Music we’ve been working with recording artists for over two decades. The fact that we can help high school students across Toronto and Wikwemikong express themselves creatively, teach the business, and introduce entrepreneurial and educational opportunities is immensely rewarding,” explained Eric Lawrence, Coalition Music and TEMPO co-founder. “We look forward to expanding TEMPO and offering similar opportunities to as many students and communities as possible.”
Sponsors of Coalition Music’s “The Music Business” course include Rogers Media and the Ministry of Economic Development: The Youth Employment Fund.

Update on Death of 49-year-old Man in Neebing River