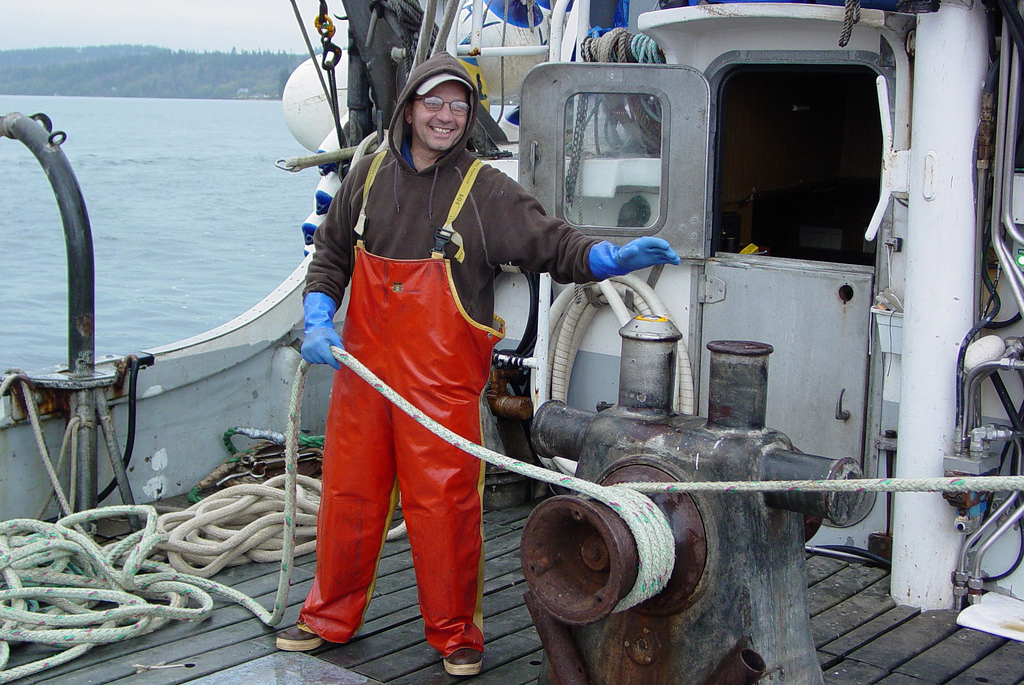 It was a huge industry with thousands of licensed fishermen employing tens of thousands of people. “Those days are almost forgotten,” said Tom Goniea, the fisheries biologist who oversees commercial fishing for the Michigan Department of Natural Resources. “The modern commercial fishery is very different; it has been consolidated and streamlined.”

“Since 1968, the state-licensed commercial fishery has operated under a limited-entry policy, which simply states that the number of commercial fishing licenses is limited to those that have been issued in the preceding year and only those individuals who held their licenses that year are eligible for the new one,” Goniea explained.

“Currently there are 50 commercial fishing licenses in Michigan. They’re spread out over all four of the Great Lakes, though not all 50 licenses are actually fished in a given year. Roughly 35 of the 50 licenses actually harvest fish. The others maintain their licenses because the limited-entry system makes them valuable”.

“Of the 35 that actually harvest fish, there are roughly 25 businesses,” Goniea continued. “Some businesses own and utilize more than one license. Each business probably employs somewhere between five to 10 people.”

Commercial fishermen are heavily regulated as to where they can fish, what they can catch and what equipment they can use. Each license specifies the types and amounts of gear to be used. Commercial fishermen, as authorized by their licenses, can use set hooks, impoundment nets, deep-water small-mesh gill nets and seines.

Trap nets are “by far and away, the most popular gear,” Goniea commented. “We’re talking 95 percent of all commercial fishing harvest.”

Trap nets gather and hold fish alive, so when they are lifted, fishermen not only collect the fish at their freshest, but can release non-commercial species or undersized specimens back into the water alive.

Commercial fishermen target a wide variety of species. “It’s dependent largely on fishing location,” Goniea continued. “Saginaw Bay and Lake Erie, for instance, have a diverse commercial harvest including carp, catfish, quillback, buffalo, gizzard shad, bullhead, gold fish and some whitefish. In Saginaw Bay there’s also a yellow perch fishery. But outside of those areas, the state-licensed commercial fishery on the Great lakes is essentially for a single species – lake whitefish.”

As the Great Lakes have changed, the commercial fishery has, too.

“The yellow perch fishery in Saginaw Bay produces between 35,000 and 80,000 pounds a year, comments Goniea. “It has the potential to be larger, but the perch population isn’t there”.

“As with all types of fishing, if there are more fish in the water, there will be more fish caught.” The restrictions on the amount of gear commercial fishermen can use guarantees that the fish stocks are not overexploited, Goniea said. “If fish populations go up, the catch goes up,” he explained. “If the amount of gear wasn’t fixed, guys could use more gear and continue to fish the stocks harder. That isn’t what happens now. “The commercial fishery in the Great Lakes is small enough and well-regulated enough that it no longer drives population dynamics as it did many, many years ago,” Goniea continued. “The driving force behind fish populations in the Great Lakes today is invasive species. They’re the determining factor as to what fish populations look like.” Despite the limited-entry nature of the fishery, part of the DNR’s role in managing commercial fisheries is assessing the stocks and determining appropriate harvest levels, Goniea said. “In waters where state-licensed and tribal fishermen share the resources, lake whitefish harvest is managed by annual quota,” he said. Where marketing is concerned, commercial fishermen range from folks who simply harvest the fish and wholesale them to distributors, to those who operate their own fresh fish markets. “Fishermen who operate retail fish markets can make four to five times on their catch what they would simply selling fish wholesale,” Goniea said. Gross dockside value, based on average price per pound, of Michigan commercial fishing operations is conservatively estimated at between $10 million and $12 million annually, Goniea said. “Obviously, once all that fish moves through the retail outlets, there’s a much greater impact on Michigan’s economy.” Michigan’s commercial fishery is almost entirely devoted to table fare for humans, though there is a small market for gizzard shad on the East Coast, where they are used as bait for commercial crab fishermen. “That’s the exception, not the rule,” Goniea concluded.

Sure Sign of Spring – Port of Thunder Bay Opens