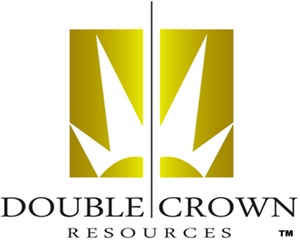 Double Crown Resources has an interest in the Bateman gold & nickel prospect near Thunder Bay.

Previously, Double Crown announced its intention to acquire full ownership of a Portable Aggregate Transport System, along with all patent and exclusive marketing rights. This acquisition process is in early stages. Additionally, it was announced that a 3-year contract is currently under development with a major U.S. petroleum producer for use of the transport system to supply large tonnage aggregate loads of vital industrial minerals needed for ongoing drilling operations in the Bakken Shale Region of North Dakota.

The initial number of Portable Aggregate Transport Systems specified by this driller is 2000 units. At the intended lease cost of approximately $3000 per unit, per month this would return over $6 million of income per month to Double Crown (over $200 million in total for the proposed 36 month contract period).

Double Crown management representatives are currently meeting with the developers, builders and patent holders of the Portable Aggregate Transport System. Under the terms of the signed Memorandum of Understanding (MOU) now in effect, Double Crown management representatives are being given private briefings on design and production plans as well as direct demonstrations of a full scale working unit at a location in Texas.

Later this week, Double Crown representatives will meet with one of the largest global suppliers of industrial minerals to discuss capabilities and potential new applications of the technology.

The primary benefit of the Portable Aggregate Transport System is to dramatically improve the speed and efficiency of high volume aggregate material transport, resulting in significant operating and economic advantages for users. The system can lower the number of material handlings from as high as 6 to only 1. Less handling of the materials means less risk of breaching their integrity as well as immediate savings in liability and time.

Also, because the cargo is fully contained, risk of material loss is reduced by 30% to 40%. Double Crown intends to utilize these transport systems for its own deliveries of fracturing (frac) sand and other commodities and also lease the units to other users. Mass production is planned within a 6 month period. Photos, videos and detailed specifications of the Portable Aggregate Transport System will be posted to the Double Crown company website in the near future.

Double Crown’s Director of Oilfield Service Operations, Allen E. Lopez, commented, “The acquisition and intended use of the new Portable Aggregate Transport System has the highest potential of any undertaking that Double Crown Resources is currently working on. The benefits to our own company plans and to our customer contacts who will be able to use the system are major and long ranging.

Our fracturing sand specialist, Keith Tubandt and myself recently visited a transload facility in southern Texas. The manager of the facility indicated he has seen rail cars come in with as much as 50% loss of cargo. As we walked about, we noticed shiny frac sand literally covering the rail tracks. We can put an end to this type of waste. Furthermore, many of the transload facilities today are at maximum capacity and no longer accepting deliveries.

Therefore, the rail cars and truck trailers are being stored and the storage costs are astronomical. Portable Aggregate Transport Systems can have a far greater impact on the rest of the world too, even more so than the United States, as other countries do not even have transload facilities. We will be able to load our units onto ships, off load them to rail cars or trucks and deliver them directly to the drill sites. This is clearly a logistics game change.”

Double Crown Resources, Inc. is a natural resource exploration and development company holding a 100% interest in the McNab molybdenum property located in Southwest, British Columbia, Canada and the Bateman gold & nickel prospect near Thunder Bay, Ontario, Canada. In addition, Double Crown is targeting new properties as well as oilfield service projects that have the potential for early positive cash flow. The company is presently reviewing a number of new natural resource properties that are near to, or in production, located in North, South and Latin America. Multiple oilfield service projects are currently under active development. Double Crown Resources, Inc., originally founded in 2006, is based in Henderson, NV.