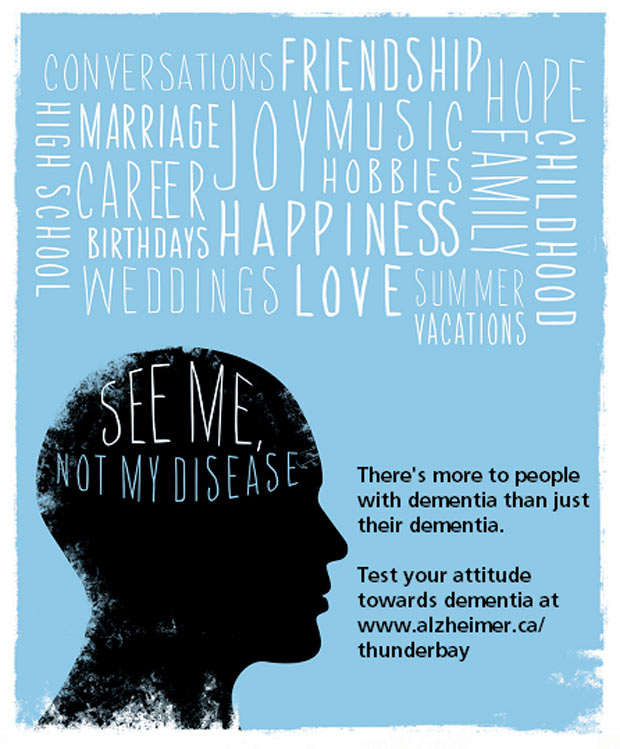 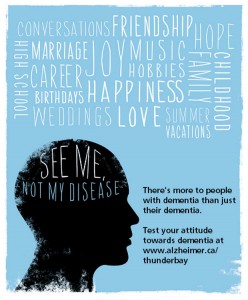 THUNDER BAY – Health – Imagine a close friend tells you that she has dementia.  Would you avoid her for fear of being embarrassed by what she might say or do?  If you answered yes, you’re not alone.

According to a recent poll by Alzheimer’s Disease International, 40% of people living with dementia reported that they had been avoided or treated differently after diagnosis. One in four respondents cited stigma as a reason to conceal their diagnosis.

Despite the rising numbers of Canadians living with dementia, and its most common form, Alzheimer’s disease, these conditions are still widely misunderstood.  That’s why during this year’s Alzheimer Awareness Month, the Alzheimer Society of Thunder Bay is helping to launch a nation-wide campaign called See me, not my disease, let’s talk about dementia.  Its goal is to address myths about the disease, shift attitudes and make it easier to talk about dementia, encouraging everyone to see the person beyond the disease.

Dementia is more than the occasional ‘senior moment’ or misplacing keys.  It’s a progressive degenerative brain disorder that interferes with a person’s ability to remember, think and process information.  It affects everyone differently, but people with dementia are still people with unique abilities.

Public health experts say that is has never been more important to deal with the stigma surrounding dementia.  Today, 747,000 Canadians now live with it, a number expected to double to 1.4 million in the next 20 years.  In Thunder Bay, over 3,200 individuals have Alzheimer’s disease or a related dementia, and it is estimated that for every person with dementia, at least 12 more people are affected including family, friends and caregivers.

Anne Harrison is one of the growing numbers who understand what is at stake. Anne cares for her husband who has Alzheimer’s disease.

“People aren’t ashamed of cancer. So, why should we be ashamed of Alzheimer’s disease?” she asks.

The Alzheimer Society’s campaign stresses that only by understanding the disease and talking more openly about it, can we face our own fears.

What you can do

Test your attitude toward dementia by taking the Alzheimer Society’s online quiz at www.alzheimer.ca/letstalkaboutdementia.  While there, learn more about the disease and how you can help change the conversation.

Visit the Alzheimer Society of Thunder Bay website at www.alzheimer.ca/thunderbay to learn more about local programs and services, and ways to get involved.

Like the Alzheimer Society of Thunder Bay on Facebook at www.facebook.com/astbay to keep up-to-date on our events and latest news.

Be a stigma buster

Stigma not only hurts people with the disease but also discourages their families from confiding in others or getting the support they need.  You can help reduce stigma.

Here are six easy ways you can make a difference:

1. Learn the facts – Learn more about dementia and share your knowledge with others, especially if you hear something that isn’t true. Talking about dementia lessens our fear and increases understanding.

2. Don’t make assumptions – Dementia is a progressive disease and affects each person differently.

4. Treat people with dementia with respect and dignity – No matter what stage of the disease a person’s at, he’s still the person he always was, with unique abilities and needs. Appreciate who he is.

5. Be a friend – Be supportive.  Stay in touch and connected. Social activity helps slow the progression of the disease and lets people with dementia know you care.

6. Speak up! – Don’t stand for stereotypes that perpetuate stigma and myths.

Recall: Two lots of Advil Cold & Sinus Day/Night Convenience Pack recalled due to labelling error that may cause confusion between daytime and nighttime...