Home NNL Headline News Thunder Bay is one of 53 Canadian communities participating in Trick or... 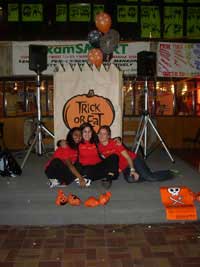 THUNDER BAY – – When the door opens this Halloween, houses in Thunder Bay may find 19 year old ‘ninja’ on their doorstep. She’s definitely not your typical trick-or-treater. Underneath that costume will be Allison Pelletier, a 2nd Year Tourism & Travel student at Confederation College and she’s not asking for candy; She’s asking for a donation of non-perishable food to help Canadian families who struggle to put food on the table.

Allison Pelletier is one of over 6,000 youth across Canada who will dress up this Halloween and go door-to-door, saying: ‘Trick or Eat!’

Thunder Bay is one of 53 Canadian communities participating in Trick or Eat. “It’s startling to hear that over 720,000 people visit a food bank each month in Canada,” shared Dan Kincaid Student Union of Confederation College Director of Special Events the student organizing the campaign at Confederation College “Trick or Eat is a fun and easy way for us to do something about that”.

Trick or Eat is becoming a regular part of Halloween in Canada. It’s a fun way for young people to get involved in an issue that is sometimes ignored in today’s go-go world. The goal this year is to raise 140,000 meals, and an additional $20,000 in online donations through students asking family and friends to sponsor them during the night which further increases their impact. While students canvass neighborhoods this Halloween, they will also be raising awareness about the reality that hunger exists in their own backyards. This year’s campaign is supported by Much Music, Telus and Canadian Pacific.

Trick or Eat is just one of several initiatives organized by a national youth-driven charity called Meal Exchange, which helps young Canadians realize their potential to improve the future of communities, through meaningful opportunities to reduce local hunger. More information can be found at www.trickoreat.ca