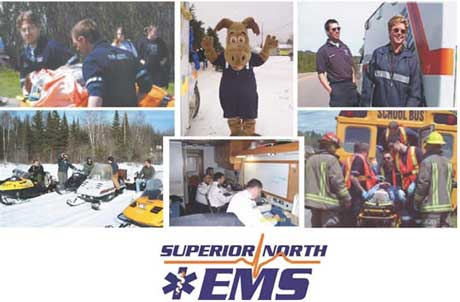 THUNDER BAY – Thunder Bay paramedics participated in a mock exercise with Ornge on October 26th 2011. The scenario involved a mock crash of an Ornge flight that required Superior North Emergency Medical Service (SNEMS) paramedics to respond. This type of training proves beneficial to all services involved, due to the seriousness of such an event. Ornge, Ontario’s provider of transport medicine services, holds an emergency simulation annually as part of its accreditation for the Commission on Accreditation of Medical Transport Systems (CAMTS).

During this simulated event, a medical helicopter crashed on arrival at the Thunder Bay International Airport. The Airport Emergency Services Fire and Thunder Bay Fire & Rescue (TBFR) attended to the fire risk that developed during the mock event. SNEMS units in concert with TBFR extricated the victims. SNEMS then, triaged and stabilized the victims before transport. Superintendent Don Gosselin was on site directing the SNEMS response. The scenario involved one expired crew member, two crew members injured seriously, the original patient who was also in serious condition, and finally one uninjured crew member. The seriously injured were transported to Thunder Bay Regional Health Science Centre.

The mock crash was realistic enough that some bloggers in Thunder Bay reported the incident as real.

A total of four SNEMS units were deployed to the mock exercise; three ambulances and one paramedic response units attended the scene. No previous knowledge of the exercise was shared with the service to gather a clear assessment of the response times under normal operating volumes.

“We have concluded the de-briefing looking at what worked and, more importantly, the area of improvements. The purpose of these exercises is to create a realistic scenario that challenges the system and exposes weak links in the response,” commented Chief Norm Gale. “Overall we are happy with the exercise and look forward to any system improvements that may come as a result of this initiative”.

“Ornge has an outstanding safety record, but it essential to be prepared for emergencies of this type,” said Steve Farquhar, Vice President of Operations for Ornge. “The lessons learned from this exercise will help improve communication and coordination among Ornge stakeholders. We appreciate the participation of our valued partners in Thunder Bay.”