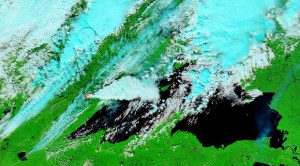 THUNDER BAY – Cold and wet weather have helped limit fire activity in Northwestern Ontario. MNR reports that as of Tuesday September 13, with only five new starts reported that weather is helping reduce fire risk. The number of active fires in Ontario has now dropped to 56. In 2011 to date, there have been 1,201 fires affecting 628,972 hectares of forest in the province.

The Ely Minnesota fire which brought smoke and ash to Thunder Bay is now being fought with both American and Canadian firefighters. Ontario will be assisting Minnesota’s efforts to suppress this fire by providing Quickstrike tanker support on Wednesday September 14. Quickstrike is when a waterbomber from Ontario drops water on a fire in a bordering province or state and then returns to its home base.

The Ely fire is about 20KM (12 miles) from the Canadian border and is 16,000 acres in size. The fire is in close proximity to Quetico Provincial Park at its closest point.