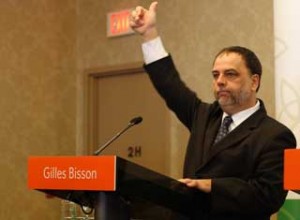 THUNDER BAY – The invitation to party leaders from the Northern Ontario Municipal Association (NOMA) is hanging out there like a hanging curve ball waiting for a skilled player to try knock it out of the park. However it appears so far that more leader’s debates remain off the political radar screens in Ontario.

It is not just NOMA seeking more debates. “A week has gone by and there’s still no response from Dalton McGuinty or Tim Hudak on the New Democrats proposal for three debates during the election campaign”, said NDP MPP Gilles Bisson. “The silence from McGuinty and Hudak has been deafening. This week all we have seen is more attack ads and posturing. The people deserve to see party leaders who want to be the next Premier on their screens talking policy, not trading insults during the commercial break”.

The New Democrats are finding an unusual friend in their call to increase the number of Leader’s Debates. The Toronto Star editorial today endorsed the NDP’s call last week for more debates.

“…Ontarians would be well served if all parties took their cues from the overwhelming response Canadians had to Layton’s final call for a better brand of politics….That means heeding NDP Leader Andrea Horwath’s call for at least three televised leaders’ debates instead of just one to give voters more opportunities to hear about the issues…” – Toronto Star, Sep. 4, 2011

The Toronto Star adds, “Leaders’ debates are not perfect, certainly. But even flawed debates are far better than a month of canned speeches and attack ads that do little to let Ontarians decide who would be the best to run their province”.

“The NDP is calling for three leaders’ debates taking place in different regions of the province including Northern Ontario,” states Bisson. “We want to hear answers from McGuinty and Hudak. If they would prefer to stick to stage managed press conferences and aggressive attack ads then we need to hear that from them. They need to explain why they won’t debate the real issues live to allow Ontarians to judge who they want to see in the Premier’s office”.

We won’t let the Liberals off the hook – Horwath