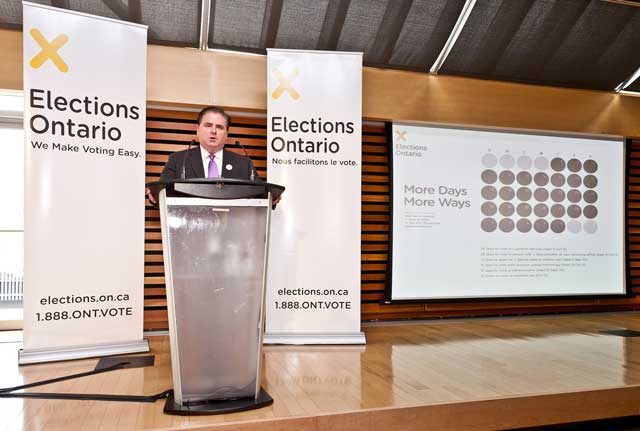 THUNDER BAY – The campaigning is off in full swing but the writ has yet to be dropped. The Ontario Election Campaign will officially get underway on September 7th. The vote will be on October 6th, 2011.

Elections Ontario is working to make the process of voting easier and more accessible to all Ontarians. “It’s now easier than ever to vote in a provincial general election,” said Chief Electoral Officer Greg Essensa today at a media conference held in Toronto. Stating that making voting easy was the core driver for Elections Ontario, Essensa took attendees through a review of the voting options available, highlighting the More Days More Ways approach which gives voters more flexibility than ever before to choose how, when and where to vote.

Essensa spoke of the many ways that eligible voters can choose to cast their ballot. New for this election, Ontarians who are eligible to vote will be able to do so by mail using a Special ballot. Voters can also cast their Special ballot at their returning office or satellite office over a period of 28 days.

As well, Elections Ontario is making available new assistive voting technology (AVT). Demonstrated during the media briefing, the AVT’s audio tactile interface, paddles and sip & puff devices allow voters who had previously needed assistance to cast their ballot to now vote secretly and independently. The AVT will be available in returning offices and satellite offices beginning September 21 until October 5. “The assistive voting technology is a key part of our commitment to offer more choice to Ontario voters and just one of the ways we’re making it easy to vote in the 2011 general election,” said Essensa.

Essensa also introduced the recently launched wemakevotingeasy.ca website, which was designed to be accessible, easy to navigate and easy to understand.

The website informs voters about acceptable types of identification to bring to the polls, and hosts useful web apps. These allow voters to find which electoral district they live in (Find Your Electoral District), to check to see if they’re on the Voters List (Am I On The List?), to find their voting location (Where Do I Vote?, launching September 12) or to apply for election day employment (Election Job).

The companion to all of the options available for this election is the enhanced customer support strategy that Elections Ontario has put into place. Essensa explained how voters can reach frontline communications support workers in both official languages by: