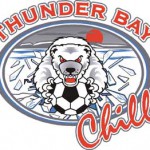 Bremerton – The Thunder Bay Chill’s season has been ended by the Kitsap Pumas, after a 3-1 defeat in the semi-finals of the Premier Development League (PDL) Championship.

The Chill scored in the 33rd minute, after Luis Gonzalez was taken down in the box and Gustavo Oliveira slotted home the penalty shot. The Chill took the 1-0 lead into the half with no real offensive threat coming from the Pumas.

The theme changed in the second half as the Pumas scored three unanswered goals (60, 72, 90 minute) to end the Chill’s impressive season.

The players, coaches and management would like to thank all the fans, media and sponsors for their support in the 2011 campaign.