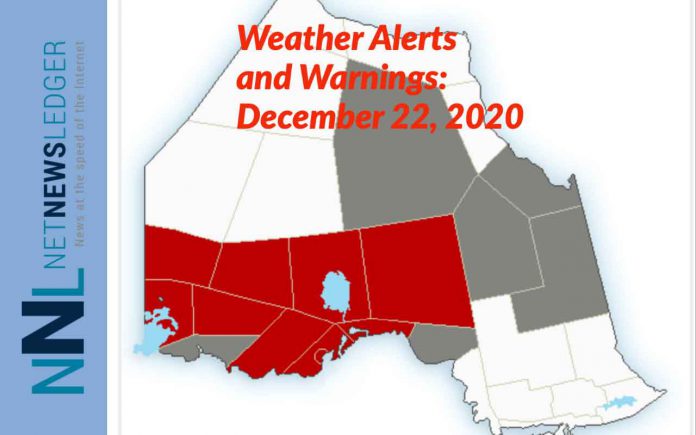 Thunder Bay – WEATHER – For December 22, 2020 there are weather warnings and weather advisories for Western Ontario. Northern Ontario has no warnings or alerts this morning.

Snowfall Warnings are in effect for:

Environment Canada has issued a Snowfall Warning. The weather service says that significant snowfall is expected to start late this afternoon and continue into Wednesday.

The total snowfall amounts which could be from 10 to 20 cm are expected by Thursday morning. Snow may mix with rain along the shoreline of Lake Superior on Wednesday morning and into early Wednesday afternoon as temperatures briefly rise above the freezing mark. As a result, lesser snowfall accumulations are anticipated near Lake Superior.

This morning under mainly cloudy skies, it is -10°C in the city. Today the high should be -3°C. With winds up to 15 km/h, the wind chill will feel like -15°C this morning and -6°C this afternoon.

For tonight, the forecast is for snow at times heavy with risk of freezing drizzle. Snowfall amounts of 5 centimetres are expected. The wind will be east 20 km/h becoming light late this evening. The temperature should rise to +1°C by morning. The wind chill will be -10°C this evening.

A snowfall warning is in effect with snow starting late today. Total amounts of snow expected will be up to 20 centimetres.

It is -11°C this morning at 05:45 am CST in Dryden under cloudy skies, with a high of -7°C expected. There is a 30 percent chance of flurries. The forecast is for snow, heavy at times beginning late this afternoon. Today, total snowfall amounts of 2 centimetres are expected. Winds of up to 15 km/h putting the wind chill near -15°C.

For tonight, there will be snow at times heavy with a risk of freezing drizzle. Snowfall amount of 10 to 15 centimetres are likely. Winds will become northeast 20 km/h gusting to 40 before morning. The overnight low -11°C. The wind chill -12°C this evening and -17°C overnight.

In Sachigo Lake this morning it is -23°C with a high forecast of -19°C. Skies will be a mix of sun and cloud. There is a 30 percent chance of flurries this morning. Winds up to 15 km/h. The wind chill -30°C this morning and -23°C this afternoon. There is a risk of frostbite for exposed skin.

Tonight, the weather service says to expect partly cloudy skies with winds up to 15 km/h. Low -26°C. The wind chill near -33 meaning there is a risk of frostbite.