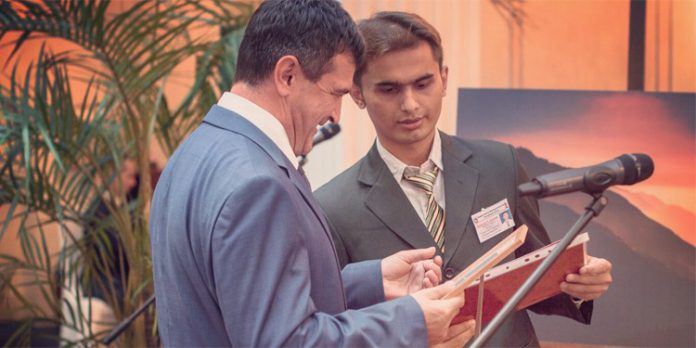 Sandesh Lamsal (सन्देश लम्साल) is a 26 years old Nepalese influencer, doctor, model, international volunteer, social worker and sportsman who believes on “The harder you work for something, the greater you’ll feel when you achieve it.” He is known for his creative contents on social media platforms, social works and sport.

Sandesh started his sports career from his late childhood by joining World Taekwondo. Because of his hard work and dedication, he was able to get I Dan black belt certificate from Kukkiwon, the headquarter of World Taekwondo, South Korea on 2014. Then he moved to St. Petersburg, Russia for his further education after getting a scholarship from the Russian Government. Here he didn’t stop practising Taekwondo. He says, “It was very difficult for me to continue Taekwondo in Russia as I didn’t know the Russian language and I was new to Russia.” Sandesh found a Taekwondo institution there where he started to practice after doing 1-year Russian language course from First Pavlov State Medical University. Sandesh has participated in many Taekwondo competitions in Nepal and Russia. As a result of his hard training, he successfully got II Dan black belt from Kukkiwon in 2018. Sandesh is still practising Taekwondo in St. Petersburg and hopes to get III Dan black belt on 2021.

Similarly, from 2015 he started to participate on social works and volunteering activities. He was the part of AISEC Russia and has worked on many projects based on the cultural exchange programs. After the 2015 Earthquake in Nepal, he participated in many fund-raising programs and in 2016, Sandesh was the Organizer and Lector of program “ Nepal-fest: Nepalese Culture Charity Festival” which raised fund for the restoration of a school damaged by the earthquake. He has contributed as a volunteer on many national and international programs held in Russia including FIFA Confederation Cup 2017 and FIFA World Cup 2018 where he got chance to serve as a medical volunteer, for which he was awarded medal and certificate form Russian government and FIFA organizer team. He is serving as The representative of Nepal in St. Petersburg and Leningrad region from 2016 onwards and has contributed a lot on the bilateral relationship between Russia and Nepal. He and his team have organized many programs, concerts, cultural gatherings and food court in St. Petersburg, Russia with a motive of promoting Nepalese culture, tradition, food and lifestyle for which he was featured on the Russian National Diplomatic Journal “Консул” in 2016.

Sandesh is very active on social media. He is very popular among the lifestyle influencers for his creative videos. He has collaborated with many popular Russian and Indian social media influencers. His contents have been appreciated and shared by many Bollywood stars too. Recently, he was nominated as one of the top 10 popular lifestyle influencers in St. Petersburg in 2020 by heepsy.com. His accounts are verified on popular social media platforms like Google, Amazon, Likee, Helo, etc. Sandesh takes Manisha Koirala and Sunil Thapa as the source of his inspiration. Both Manisha and Sunil are Nepalese citizens who are not only popular in Nepal but also in India.

After graduating from First Pavlov State Medical University in 2021, Sandesh is planning to go back and work on social, medical and entertainment fields. He says, “If you want to live a successful life, start exploring yourself. Don’t only focus on the marks in exams, rather study for knowledge. Do the the work which makes you happy. This will pave your path towards success.”