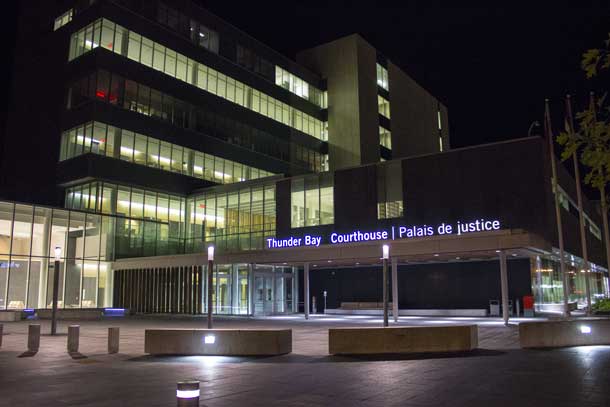 THUNDER BAY – The Thunder Bay Courthouse was the scene of a suspected electrical fire earlier today. The fire on Sunday, October 3rd, 2020 has caused electrical and water damage to the structure.

Thunder Bay Fire Rescue responded to the blaze which is, according to Platoon Chief Philip Dzuba was contained to the seventh floor of the building.

Thunder Bay Fire Rescue responded to the call at 3:54 PM EDT this afternoon following reports of an unknown fire at the courthouse.

The first arriving fire crews could see smoke coming from the building before arriving on scene, and a second alarm was initiated.

A total of 27 fire personnel were on scene to help bring the fire on the 7th floor under control.

Severe damage to a mechanical room required significant effort in order to be able to turn the building back over to security.

After the fire was under control, TBFR crews worked closely with Synergy North crews to ensure the building was safe.  No one was injured in the fire and it currently remains under investigation.

There is extensive water damage to the Courthouse. and the north face of the exterior of the building shows evidence of the fire.

For Monday, it is still uncertain if the courthouse will be open or not.

No Firm Date for Thunder Bay Courthouse to Re-Open