OTTAWA – More discussion over the Federal Liberal Speech from the Throne.

National Chief Perry Bellegarde of the Assembly of First Nations said today’s Speech from the Throne builds on the important steps initially announced in 2019, and adds new commitments to improving the lives of First Nations through better infrastructure, policing and other key issues.

“Today’s Speech from the Throne promised to maintain the important commitments made in the 2019 Speech with additional specifics on infrastructure, housing, policing as an essential service, and a number of other items,” said National Chief Bellegarde. “First Nations support action on the climate crisis, new legislation ensuring the implementation of the UN Declaration on the Rights of Indigenous Peoples, and narrowing the gap in the quality of life between our people and the rest of the Canada. We must now ensure these commitments are reflected in the mandate letters from the Prime Minister to his ministers, and that they are then carried forward into the next federal budget.”

“We must continue to work together based on the foundation of the Treaty relationship, which is all about partnership, mutual respect and sharing to ensure that legislative and policy changes are done in the right way. Of course, this is happening during a pandemic, which makes the work more difficult, but efforts on reconciliation must continue for the sake of First Nations and Canada alike.”

Today’s Speech from the Throne contained several commitments that involve and affect First Nations, including the promise to work jointly with First Nations on legislation to implement the United Nations Declaration on the Rights of Indigenous Peoples; continuing work on safe drinking water and eliminating all long-term drinking water advisories; high-quality, culturally relevant health care and mental health services; the implementation of the Truth and Reconciliation Commission’s Calls to Action, and the Calls for Justice of the National Inquiry into Missing and Murdered Indigenous Women and Girls. National Chief Bellegarde advocated for First Nations policing to be deemed an essential service, with legislation to support its proper resourcing, so the AFN welcomes the mention today. 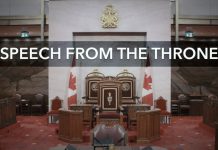