THUNDER BAY – Good evening Mayor Mauro and Council. My name is Lori Paras and I am here to advocate postponing the build of the Chapples Multi-Use Indoor Sports Facility until proper public consultation has been achieved and all funding mechanisms to support this major infrastructure project are in place. Thank you for the opportunity to present this deputation tonight.

In the Spring of 2017, city council approved the Chapples Park Master Plan, Report 48/2017.  This report to council supported the development of a multi-use indoor sports hub at Chapples Park and was considered a medium-term priority, with medium-term meaning 6 to 10 years.  The proposed facility was to be built sometime between the years 2023 and 2027. Mayor and council can find this information in your report R74/ 2020.

In 2018 a new city council was elected and this 6 to 10-year future project became what many would consider the number one priority project of council, and has also been dubbed a legacy project in this council chamber. I do not remember any candidates in the 2018 municipal election, running on a platform of moving this medium-term priority, to a top priority if they were elected to council.

Stantec Architects, the Winnipeg firm hired to design the new facility, hired Hanscomb to identify the potential financial risks that COVID -19 could have on construction costs.  Hanscomb identified 10 major risks that the city could potentially expect if moving forward at this time, including site shutdowns due to outbreaks of the virus among site workers, and government mandatory industry shutdowns. They were also concerned with delays in delivery of materials and equipment to the building site and the unavailability of materials due to factory closures or shipping interruption.

According to a CTV news article dated June 4, 2020, Dr. Theresa Tam, the Chief Public Health Officer of Canada said that even though progress is being made in fighting the novel coronavirus, until an effective vaccine or treatment is available, an ongoing effort is going to be required or Canada could see an “explosive” second spike. The figures showed that if the spread prevention measures are insufficient, Canada could have another peak come October.

On July 10, 2020, the Thunder Bay Chamber of Commerce, in an email to city council, said that they felt that the city’s request for feedback from residents about the design concept for the project falls short of what’s needed to ensure transparency and fiscal accountability. They were also concerned that there was no information provided related to the final projected capital costs, operating costs, revenue, and usage projections, or a business plan for the facility.

On July 16, 2020, The Community Economic Development Commission, also known as the CEDC, in their review of the Indoor Sports Facility Proposal felt it was prudent to secure funding from higher levels of governments for the project to improve financial feasibility and also felt the location of the facility, being largely removed from other businesses, and with limiting design factors relative to potentially hosting conventions, tradeshows and conferences, would not generate significant economic development benefits long term.

The CEDC also expected the facility to operate at a net loss per year, requiring an annual subsidy from the municipal budget, with no significant job creation anticipated.

On July 16, 2020 Tourism Thunder Bay shared their review of the Indoor Sports Facility Proposal.  While stating the venue would have tourism value, they disagreed with the projected 11 events by potential end-users at the proposed facility and said that realistically it was most likely to host, I quote “ 6 modest sports tourism-oriented events annually”. Unquote.  In their review, Tourism Thunder Bay was concerned with multiplier rates used by city administration to estimate economic tourism value. They said that the multiplier rates used were 10 times higher the standard of sport tourism rates. Tourism Thunder Bay also said they had not received any requests in the last decade for a bid for help to host indoor soccer events.

On July 20, 2020 Councillor Johnson asked city administration to prioritize the long list of current infrastructure projects on the docket. She wanted to know where the Indoor Sports Facility stood in comparison to Victoriaville, the Conservatory, the replacement of Fort William Gardens, the library, the new police station, the Canada Games Complex, the new fire station, and the 55 Plus Centre. Did Councillor Johnson receive this prioritized list?

The Multi-use Indoor Sports facility Committee is comprised of the Mayor, 4 city councillors and 7 city administrators.  I could not find the name of one private sector person acting in a citizen advisory capacity on this committee, to look out for the best interests of the community at large or bring an outside or alternative perspective.

At the June 16, 2020 meeting of this Committee, information was provided by Councillor Oliver that “ relative to the OCIP and Investing In Canada infrastructure program that funding would potentially be available to kick start the economy but only after the Covid-19 pandemic.” This is on page 2 of the meeting minutes.

City administration has put in funding applications to the NOHFC, FEDNOR, and the largest funding application of $22 million dollars from the ICIP, the Federal investing in Canada Infrastructure Program that Councillor Oliver referred to.

Council and administration are also aware that under the guidelines of the ICIP funding, the potential $22 million in funding would not be available if the project went to tender before funding was approved.

If city council votes to move forward with the tender for construction of the indoor sports facility you will lose the $22 million dollars in Federal ICIP funding.

In a report generated by the Thunder Bay Chamber of Commerce titled  “An Analysis and Forecast of the City of Thunder Bay’s Municipal Finances,” it reveals that 61% of the City’s total taxation revenue comes from residential properties”.

If you vote to move forward with the funding model on page 5 of Report 74/2020 you will be putting tens of millions of dollars in infrastructure spending primarily on the backs of the residential homeowner.

On August 10, 2020, the Community Consultation and Engagement results were reported to Mayor and Council in a memorandum from city administration.

Of the 405 online comments collected, only 35% of respondents supported building a multi-use Indoor Sports Facility.

On August 8 and 9, 2020, an online poll conducted by tbnewswatch.com was responded to by 1299 people and showed that 75% of respondents expressed that they wanted the proposed Indoor Sports Facility dismissed for good, or that the project be shelved for the time being. If choosing to use these online models as valid tools, these percentages indicate a strong desire from the community to delay, or not build the Indoor Sports Facility at this time.

It will also allow time for you to convince the 50-75% of citizens responding with a hard NO or a soft NO to willingly get on board with this major infrastructure project, your Legacy Project.

I support the building of an Indoor Sports Facility in Thunder Bay, and I support Soccer Northwest’s expectation that the city offer financial support for their club, but I do not support a $42 million dollar facility that will place a large tax burden on the backs of its residential homeowners.

The pace of this project is too fast for a community in the midst of a worldwide pandemic. Your citizens are trying to enjoy their summer vacation after being on lockdown for close to three months. Many have to deal with closing their businesses, are dealing with unemployment, and many are contemplating whether their children will be returning to school in the fall.

Thank you and Miigwetch

NetNewsLedger invites Letters to the Editor. Email us at newsroom@netnewsledger.com 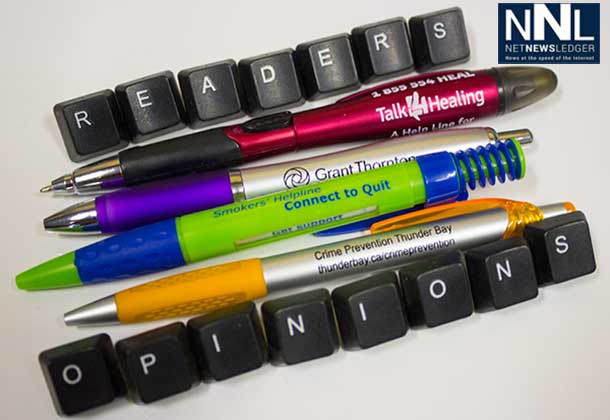