IGNACE – The Trans-Canada Highway was closed due to a motor vehicle accident on August 8, 2020. The Ignace Fire and Wabigoon Fire departments were called out to assist. The accident happened west of Ignace.

Wabigoon Fire Department was called out because Ignace fire was currently responding to another MVC east of Ignace.

Wabigoon Fire responded with a rescue a pumper and a tanker.

911 dispatch indicated two tractor-trailer units and an SUV involved, with the driver of the SUV entrapped. On arrival, WFD assessed the scene, land, and air ambulances were dispatched to the scene.

Working with EMS paramedics WFD used heavy hydraulic cutters to remove the driver’s door to extricate the driver from the SUV.

The other passenger only sustained light injury. The patient was airlifted to Thunder Bay Hospital and reports back to the scene indicated that he had non-life-threatening injuries.

Ignace fire arrives on the scene with a command and rescue and WFD remained n scene with Ignace Fire to provide pumper and manpower support.

The highway was closed for a few hours as OPP conducted on-scene investigation and cause. Fire services in our area have mutual aid agreements whereby we can assist each other in unusual situations, this was an excellent example of using the system.

Highway 17 currently has construction in the exact area of the collision and traffic is controlled by lights. 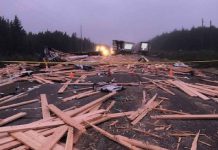 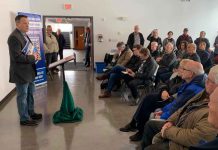 Twinning in the Plans for Highway from Kenora to Manitoba