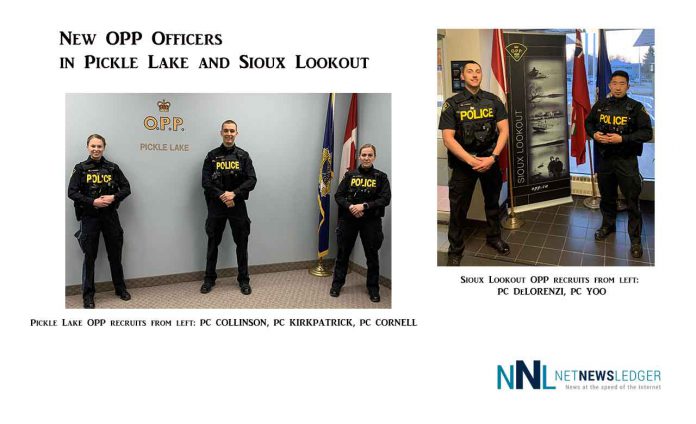 SIOUX LOOKOUT – There are some new faces in the communities of Pickle Lake and Sioux Lookout.

The OPP have announced that five new Provincial Constables have recently joined the Ontario Provincial Police (OPP) in the two communities.

Provincial Constable Steven DeLORENZI is originally from Northwestern Ontario, born and raised in Thunder Bay. Previous to being hired with the OPP, he studied Political Science and Psychology at Lakehead University. He also worked for the City of Thunder Bay Parks Department, and for various youth programs in the city. In his spare time, PC DeLORENZI enjoys being active, playing sports and being outdoors. About his placement in Sioux Lookout, PC DeLORENZI advised “being born and raised in Thunder Bay, I don’t think there is a better place to start my career than in Northwestern Ontario. I’m proud to say that I’m coming to Sioux Lookout and look forward to meeting and becoming a part of the community”.

Provincial Constable Seung Geon YOO is originally from South Korea and moved to Canada approximately seven years ago. PC YOO studied Psychology at a university in Korea and served in the Korean Military for two years. Since arriving in Canada, PC YOO has worked as a Security Officer in Winnipeg and earned a certificate from the Manitoba Institute of Trades and Technology and an honours diploma from Northwest Law Enforcement Academy. He spends his free time playing guitar and taking part in outdoor activities such as fishing, skiing, golfing, and camping. PC YOO is looking forward to working in Sioux Lookout so that he can play a role in making the community better by helping people.

Provincial Constable Haley COLLINSON is from a small town in Southern Ontario. She recently graduated from Trent University with a master’s degree in Forensic Science and completed a placement with Toronto Police Service in their Forensic Identification Lab. Throughout high school and university, she worked part-time on a duck farm. In her spare time, she enjoys staying active through mountain biking and running. Constable COLLINSON is looking forward to starting her policing career in Pickle Lake and to being a part of the community she will be policing.

Provincial Constable Morganne CORNELL is originally from Sheffield, Ontario, where she lived on a hobby farm. She attended Conestoga College and received a diploma from the Community and Justice Services program. She also worked as Security Supervisor at the Brantford Casino prior to being hired by the OPP. PC CORNELL enjoys spending her free time in the outdoors, hiking, biking, swimming and enjoying everything Mother Nature has to offer. She looks forward to serving the community of Pickle Lake as she moves forward into her new career.

Provincial Constable Stephen KIRKPATRICK is also from Southern Ontario. Constable KIRKPATRICK completed an honors degree at Wilfrid Laurier University, majoring in Psychology and minoring in Criminology. Prior to being hired by the OPP, he worked as a Senior Arena Maintenance Worker with the City of Kawartha Lakes. In his spare time, he likes to stay active and enjoy the outdoors. Constable KIRKPATRICK is excited to start his policing career in Pickle Lake and looks forward to becoming a member of the community.

Officers from the Sioux Lookout OPP and Pickle Lake OPP detachments extend a warm welcome to these new constables and know that our community members will make them feel at home as they begin their policing careers in our communities.