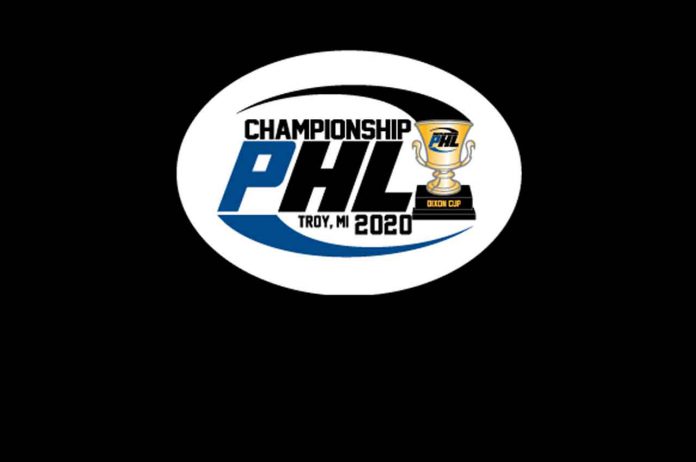 The defending under-18-champion Happy Time Tours major midgets doubled the 95 Giants U-18 side from Massachusetts 4-2 before letting a two-goal third-period lead getaway in an eventual 6-5 overtime setback against the Philadelphia Little Flyers.

As for the Sportops minor midget Kings, they came away victorious in both of their match-ups Friday, defeating the Everett Silvertips from Washington State 4-2 before going on to tame the Colorado Springs Tigers 9-2.

In the U-18 opener, the Giants scored first before Jacob Sargent drew Thunder Bay level midway through the opening period.

After the Kings fell behind 2-1 in the second stanza, Travis Hensrud clicked on the power play to knot the affair at 2-2 after two.

They then tallied twice in the back half of the third to pull out the win thanks to Jeremy Dunmore’s game-winner and an insurance effort off the stick on Mason Bazaluk.

Earning the decision in net for Thunder Bay was Eric Vanska.

In the meeting with Philadelphia, the Kings got goals from Bazaluk, Dunmore, Sargent, Cole MacKenzie, and Trenton Morriseau, wrapped around three by the Flyers, to hold a 5-3 lead, only to see their opponents strike twice in a five-minute span in the third to force extra time.

There, Philadelphia completed their comeback as Byron Hartley scored on a breakaway 51 seconds in to win it with the teams skating three aside.

Meanwhile, the minor midget Kings began their day by getting tallies from Brodie McLeod, Matt Beazley, Josh Lehto, and Jouni Kemppainen to clip the Silvertips.

Thunder Bay goaltender Gunner Paradis stopped 25 of the 27 shots he faced to record the victory.

Finishing up, the Kings’ trio of Alex Smith, Zach Biniaris and Lehto combined for a dozen points in the romp over Colorado Springs.

Smith paced the offensive attack with a hat trick and an assist while Lehto had a goal and three helpers with Biniaris setting up four markers for Thunder Bay.

Alex Remenda chipped in with a pair of tallies while Kemppainen, Jett Mintenko and Brandon Boress supplied singles.

Getting the win between the pipes was Keenan Marks.

Both Kings’ clubs will take to the ice Saturday to conclude round-robin play as they will each meet CarShield AAA from St. Louis with the U-18 match-up going at 12:15 pm while the U-15 sides will square off at 3:15 pm.