Hello CQ followers! Welcome to the daily blog for CQ NWO 2019. Today was our last full day at camp, and it was sure a full one! Our morning began with a late sleep in until 9:15, followed by a breakfast of bacon and eggs with biscuits and gravy. Between being well-rested and having a full belly, everyone was ready for our OFF THE HOOK – pirate theme!

After breakfast, younger campers stayed by the gazebo and played games like the pirate ring toss and pin the patch on the pirate, while the older campers went down the hill to play a game called walk the plank. After these games were finished, our campers used some cardboard to build pirate ships of their own. How cool!

Next up, we had lunch – wings with noodles and salad. Yum! Following lunch, my favourite…Toes Up! After that Ranger Rick popped by for a surprise visit to tell us some exciting news: the treasure map was complete and a big X had appeared! The kids all rushed to see the map, and then began the search for treasure.

Our first clue was located in the medical trailer…leading us back to the craft shack for clue number two. Then to the deck of the dining hall, on to the Camp Organizing Committee’s cabin, number 7. The last clue led us to the beach! The campers rushed down to the waterfront and found shovels and an X in the sand. You’ll never guess what they all found…a treasure chest! We pulled the treasure out and the campers couldn’t wait to get into it.

Filled with coins, jewels and pirate goodies, each camper also found a roll of paper with their name on it and inside, as they unrolled it, they found the real treasure. Drum roll please…each camper received a crisp $20 bill! As the campers continued to root through the treasure box, our camper Alessio came across a basket with some specially labelled coins in it. With some help, he arranged the letters to spell “Ashleigh” and he went to find her. This means he won the bonus $20! Congratulations Alessio and to all the campers who are now $20 richer than they were when they came to camp!

Since it was so hot, we got some bonus swimming time, and then it was time for our teen campers to lead us through an activity they organized – so sardines we played! Good job to our teen campers for trying their hands in the leadership role!

Next up we had dinner, which was a favourite for many – tacos! We got the chance to celebrate another camper birthday – Isabella turned 15. Happy Birthday Isabella!

Then, we started the best part of the week – camper and volunteer awards. First up, Companions awarded their campers, highlighting something special about them and their experience for the week. Some of the awards included social butterfly, miss congeniality, best role model, fancy fisherman, and many more. The campers were all smiles as they received their awards.

Next, we celebrated long-time volunteers with 5- and 10-year certificates as well as honoured two volunteers who go above and beyond. Karen Miller and Vince Mirabelli each received a Volunteer Extraordinaire Award for their outstanding and significant contributions to CQ. As a volunteer-based organization, CQ counts on the generous people who volunteer their time to keep camp amazing. Thank you to all of our volunteers!

Another important award that we award each year is the Quinten Spirit Award, in honour of the first camper we lost due to cancer. Quinten was a friendly, helpful, fun-loving camper who was friends with everyone he met, participated in almost every activity throughout the week, and was an all-around positive camper. This year, Alex earned the award for going outside of his comfort zone, having a positive attitude, trying every activity and being a great friend to his fellow campers. Congratulations Alex!

We also honoured four campers who are graduating from Camp Quality this year. We will terribly miss Alex, Connor, Denver and Katelyn. You will always remain a part of our camp family and we look forward to staying connected with you as you join our CQ alumni.

Our awards portion of the evening concluded with our director Ashleigh saying a few words as she ends her run as Camp Director this year. Ashleigh has been a volunteer with the Camp Quality family for 15 years, the last six of which have been our dedicated camp director. She has set a great example and has done so much for Camp Quality and all of its members during her time as director. From the bottom of our hearts, thank you Ashleigh for all you have done! We know you’ve taught our director-to-be, Sam, all the ropes and we hope she’ll enjoy the role as much as you did. As a token of appreciation, Camp Quality Canada gifted Ashleigh a specially designed Camp Quality paddle, which was signed by all of the members of our 2019 summer camp.

As the awards came to an end, it was time to PARTY! The music started pumping, courtesy of our DJ Mike from Partie Sound. The campers and volunteers hit the floor and got their dance on! Last but not least

To end our night and our week, a fireworks show was put on by Fireworks Unlimited. The party continues as I write – I’m still hearing the music blasting outside in the gazebo. Our campers are sure to be tired when they go home tomorrow, but it’ll be the best kind of tired because they had a wonderful week out at camp.

We hope that each camper had a fun experience at Camp Quality, and our volunteers too. We also hope that you enjoyed following along with our blog to get the inside scoop on all of the awesome things our campers did this week. Thank you all for reading. Until next year!

This is the eighth year that NetNewsLedger.com have hosted the Camp Quality Northwest blog. NetNewsLedger is pleased to support the work of Camp Quality, and the ongoing battle to beat cancer. On a personal note, cancer has taken both of my grandparents, it tried to take my mom. There are few people in Northwestern Ontario who are not impacted by cancer. 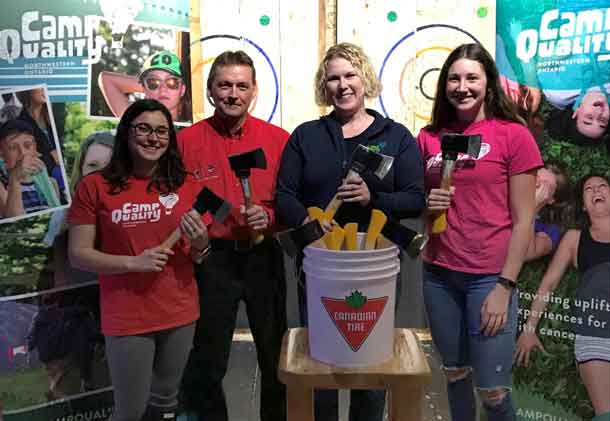