THUNDER BAY – Special to NNL – I awoke this morning to read that my “John Kennedy” John Rafferty had passed away. I am not sure if many know the story about John Rafferty and myself.

My family and I had given up the idea of voting, we were disillusioned by how the politicians said and did the opposite. We were making supper on the eve of the 2004 federal election and a knock comes to the door. I answer it and who is it but the NDP candidate with the beautiful grey hair. Sean and I were fostering for Dilico at the time and realized that the best interests were not being looked after for the children.

John was phenomenal on some avenues for us to look into, but what was more surprising was that he took the time to make sure that he had us wanting to vote again. Almost 2 1/2 hours later he left and the door closed and we all agreed that John would be getting our vote the next day!

I called the campaign office that night and spoke with Vic Baskin and said that John had just left and change three first time to not vote to be voting for him in the morning.

John helped us on a few occasions even when there was no election an that is what really made us realize that this man was truly wanting to do this for the right reasons! So this is why he is My “John Kennedy”. Today is as hard to me as the day that Jack Layton passed away. They both meant so much to me in different ways.

Come the next election 2006 I went into the office to make a small donation and said that I would volunteer some time. Wow, that ends up being a life and game changer like you have no idea. It was the best experience in my life to help in Johns campaign then, and each one until I was unable to work any longer.

After John was elected In 2008 I was very fortunate enough to work in the Thunder Bay MP office, and it was the most rewarding job that a person could ever have. A boss that has the greatest sense of humour, and the heart of gold. As so many people in our community, and others in Canada have seen or personally have been affected by.

There wasn’t a day that John didn’t call and wish us a great day and have some type of positive thoughts for us.

John and I had become good friends along the way and I have many fond memories of John and I on many of the events and outings that we were at.

John was always on the go in Ottawa and when he came home to Thunder Bay it was just as busy. John would arrive home Friday and have appointments that afternoon or evening, then up early Saturday and drive to the west end of the riding and do things all day down there then drive back Sunday and head back to Ottawa. Or he would stay in Thunder Bay and be all over at the community events etc.

My heart goes out to Pamela and the whole family kids grandkids and his sisters as well. John will be missed by so many. 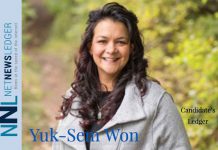