THUNDER BAY – The Dryden Observer and Red Lake Northern Sun appear to have stopped publishing. Neither newspaper has been published for the past four consecutive weeks.

The Dryden Observer has been published for most of the last century by Alex Wilson Publications was sold to Northwest Publishing four years ago, had problems a few months ago but those issues appeared to have been resolved.

Now it appears those issues have led to the closure of the newspaper. The office in Dryden is closed and reportedly staff members have moved on to other jobs in recent weeks. 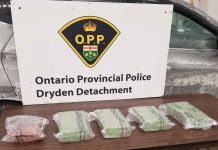